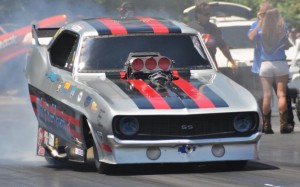 A perennial favorite in the nostalgia Nitro Funny Car class for some time, Hale came into the season looking to seriously contend in the IHRA’s all-new Nitro Jam Drag Racing Series championship program and instead, Hale found himself in a situation very unfamiliar to him and his crew. DNQs, oil downs and an overall lack of consistency left Hale without even a single round win through four races and a disappointing sixth place in the championship standings.

But on Saturday night, that all changed.

With a complete overhaul of his nitro-fed ’69 Camaro between IHRA’s last race in Rockingham, N.C. and this weekend, Hale finally found the consistency that had been missing. In front of a crowd eager for the return of nitro, Hale drove the “Mike Burkhart” tribute nostalgia Nitro Funny Car to the win at the 20th annual IHRA Nitro Jam President’s Cup Nationals at Maryland International Raceway.

“These past few months have been very frustrating for myself and for my team. I often tell people, you may lose your job, your house may burn down, you may wreck your car, but the people that rebound from adveristy the quickest are always the most successful,” Hale said. “I just made it my goal to rebound from this, get this thing off my back, and win a race. And that is exactly what we did here this weekend.”

Hale beat IHRA’s own three-time champion Peter Gallen in the final of Nitro Funny Car on a day that saw the entire field turned upside down when current points leader and top qualifier at every race this season, Jason Rupert, failed to make the field. With Rupert out, Gallen and Hale jumped at the opportunity, qualifying first and second Saturday afternoon.

With the door open, Hale whittled the field down via wins over Tim Boychuk and Mike McIntire Jr., while Gallen took out Greg Jacobsmeyer and Mike Smith, setting up another epic final round between two of the top Funny Car teams in the country. With an Ironman on the line, Gallen got the jump at the line in the “Poverty Stricken” ’77 Vega, but quickly went up in a ball of fire while Hale pedaled in the other lane, taking the stripe with a 6.319-second pass at 237.05 mph. Gallen limped across the line with a 10.817, 84.95.

“Pete is such a great driver. He has a great racecar and is capable of putting down some solid numbers. I was a little surprised that he took the left lane, I was ready for our car to do something goofy in that right lane and it did when we smoked the tires. I just happened to slap the pedal and recover it and cross the finish line first,” Hale said. “For once luck was on our side.”

After the race, Hale gathered with his team and thanked each one of them for believing in him despite the trying start to the year.

“I have to say that my crew stuck with me through all of the hurt motors, spinning tires, oiling the track and not qualifying. They never once hung their heads. Now we are going to celebrate together,” Hale said.

John Konigshofer joined Hale in a surprise trip to the winner’s circle on Saturday when the Otterville, Ontario native took the Ironman in Pro Stock. Another driver not seeing the results he had hoped for, Konigshofer put together three solid runs after qualifying next-to-last on Saturday, eliminating the first, second and third place drivers in points to take the win Saturday evening.

“This is very exciting for us. We were definitely the underdogs coming in here, all of the GMs are running really strong right now and we simply did what we could and came away with the win. We are pretty excited about what we accomplished here today,” Konigshofer said.

After qualifying sixth on the ladder, Konigshofer defeated John DeFlorian, Cary Goforth and Todd Hoerner – the three most dominating cars to date – to take the win. In the final Konigshofer blasted down the track with a 6.296, 223.99 to Hoerner’s shaking 7.113, 146.89.

“We tuned her up pretty good for the final. He and I both cut a good light, but we had a little bit more this time,” Konigshofer said. “Those guys have been running so strong all weekend. It is tough being the lone Ford in the battle with all of these GM guys, so it is quite a feeling with what we have accomplished.”

Nitro Harley saw another incredible battle as Mike Scott and Randal Andras, who have combined to win three of the first four races, once again met in the final. Andras qualified first for the second race in a row and powered his way to the finals until an issue with the bike prevented him from making the final call. With a clean pass to victory, Scott put down a 6.350, 229.78 in the final to pick up his third win this season.

Scott had wins over Larry Brancaccio and Mark Cox and had the most consistent weekend of the two-wheel competitors to claim his second Ironman in a row.

In Nitro Altered, Don Blackshear picked up his second win of the season in similar anticlimactic fashion, making a solo pass for the win. Final round opponent Ron Maroney made the call, but couldn’t get the “Blind Faith” machine fired on the line, allowing Blackshear to make a leisurely 6.283, 213.70 pass in the “Bullet Bob” Altered for the win.

The IHRA Nitro Jam Drag Racing Series will be back in action June 20-22 at the IHRA Mopar Nitro Jam Nationals at the Grand Bend Motorplex in Ontario, Canada.

The Race to the Pro Street Dragbike 6.80-Zone at a Crescendo