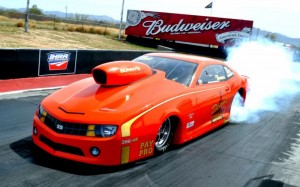 Following a successful return to competition with the International Hot Rod Association™ (IHRA) in 2014, the IHRA and IRG Sports + Entertainment™ are thrilled to announce that the Mountain Motor Pro Stock division will once again return to the IHRA Nitro Jam Drag Racing Series in 2015 as one of its core classes.

This exciting announcement once again partners one of IHRA’s oldest and most exciting classes with an already thrilling lineup of nitro-powered competition. Featuring 800+ cubic inch power plants and side-by-side, 220 mph racing on the full quarter-mile, Mountain Motor Pro Stock provides yet another piece of great entertainment and world-class competition to the IHRA’s popular Nitro Jam Drag Racing Series.

“We at the IHRA are thrilled to once again partner with the Mountain Motor Pro Stock teams in bringing this class back in 2015 and making it one of our primary classes with the Nitro Jam Drag Racing Series,” said Scott Gardner, President of IHRA Motorsports. “There is so much history with this class and it fits our new model perfectly. Already this season we have seen a lot of support from some great teams and we expect even bigger things next year as we bring these cars back and reignite the passion for traditional racing, especially among our Ford and Chevrolet fans with these great new Camaros and Mustangs. In the end it is a win-win situation for both the IHRA and the Mountain Motor Pro Stock teams.”

Debuting with the IHRA in the early 70s as one of its original classes, Mountain Motor Pro Stock will once again call the IHRA home as the series showcases an eight-car qualified field and traditional eliminations in 2015. Already this season, the IHRA has seen increasing support from a number of top-level Pro Stock teams and the IHRA expects those numbers to swell as the series commits to a long-term agreement with the class.

“All of the teams that are participating this year are thrilled to be back with the IHRA. We are very pleased with the way this season has gone and with the way we have been treated by the IHRA,” said Dean Goforth, owner of Goforth Racing and driver of the Dean’s Casing Service 2013 Chevrolet Camaro. “I think this deal will also bring some teams back to the series. There were several teams that quit racing all together a few years ago because they didn’t want to run eighth-mile and I believe some of those guys will see what we are doing here and want to get involved once again. Our goal is to see this thing grow a little each year and get Mountain Motor Pro Stock racing back where it belongs.

“From the very first pass of the year in Tucson, I believe that everyone out here racing believes that this is where we belong. This is home for us.”

“Everything is starting to turn around for this class, which is pretty exciting,” added Cary Goforth, current IHRA Pro Stock points leader and son of Dean Goforth. “If this had been anywhere else except the IHRA, we probably would have parked some of our cars, but the support we have received has been exceptional. We are really trying to show our support for this class and the IHRA in bringing Mountain Motor Pro Stock racing back to the forefront and where it belongs with the IHRA.”

For more information on the return of Mountain Motor Pro Stock racing to the IHRA, please visit www.ihra.com for complete details.