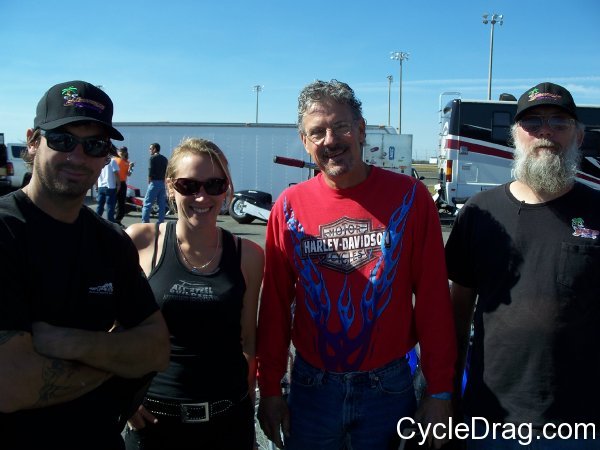 In qualifying, Vickers qualified in the #2 spot after running only one pass on Friday night, turning a 7.32 ET. During the first round of eliminations on Sunday, Vickers ran the quickest pass of the entire meet with a strong 7.15 ET pass that put everyone on notice that he was there to play and play hard. In round two of eliminations, Vickers faced off against AHDRA Nitro Rookie of the year Rich Vreeland. In what turned out to be the closest race of the weekend Vickers got the nod at the big end running a 7.20 ET against a personal best for Rich of a 7.25. “It was a great race said Johnny Vickers. I got a slight hole shot on Rich, but about 60 feet out, he came screaming by me. I thought I was dead, but I started gaining on him just before half track and motored on by him on the big end for the win.” In the final, Vickers faced recent Nitro Bike school graduate, Janette Thornley on her ex-Salt Lake City Hawaya Racing built Pro Dragster. ”Janette was running really great and had run a 7.33 in the previous round bettering Kirby Apathy who qualified in the #1 spot, so I knew I could not take her lightly. I was really wanting to better the 7.15 I had run in the first round, so I figured the track was the best it was gonna get. I went for it. The Hawaya Racing School bike #1 left hard running a 1.144 60’ time which is incredible for a Pro Dragster, but again out about 150’, the tire started spinning and I lost a little time.” In the end, Vickers got his second win in a row at the Cup, running a 7.22 ET in the final. The Hawaya Racing Team did an excellent job all weekend keeping the bikes at their peak performance. In all, over 360 entrants participated in the Spring Manufactures Cup race.

From Georgia, the Hawaya Team with riders Steve Pier on School Bike #2, Rebel Glover on School Bike #1 and Carrie Tate on her Hawaya Racing built 2012 P/D headed to the AHDRA season opener at Gainesville, FL. Steve Qualified in the #1 spot with Carrie Tate in the #2 spot and Rebel in the #8 spot, all graduates of the fall  Nitro Bike School class of 2011. In round one, Steve and Rebel faced off against each other with Steve getting the win. Carrie on her first ever AHDRA race in Pro Dragster, had qualified #2, with a great 7.46 ET and was riding well. Carrie advanced over George Elliot, who had busted a motor in qualifying and could not make the call. In round two, Steve faced off against the 2011 AHDRA rookie of the year, Rich Vreeland. Rich got out of the groove a little and had to lift, but Steve was on a killer pass, running the quickest ET of the meet at 7.27 seconds to advance to the finals. In the final round, Steve took on another Hawaya built P/D of Rocky Jackson. Rocky is always tough, so Steve had his work cut out for him. It was a good close race with Steve getting the win over Rocky, putting the #2 school bike in the winners circle.