At the MIROCK Fast by Gast Spring Nationals, Apr. 28-29, Rodney Williford became the third Pro Street rider to record a six-second elapsed time with a 6.95 at 204 mph in the second session of qualifying.

Williford ran another 6.95 in final qualifying to officially supplant the previous MIROCK Pro Street record of 7.09. In eliminations Williford further improved to a 6.94.

During a semifinal bye run on Sunday DME-backed Joey Gladstone became the fourth member of the exclusive club with a 6.99.

Williford and Gladstone join Ryan Schnitz and Frankie Stotz as Pro Street riders to break into the six-second zone.

Williford attributed the performance to an off-season rule change, which allowed him to add an extra inch of wheelbase and strip 10 pounds from his turbo Hayabusa. 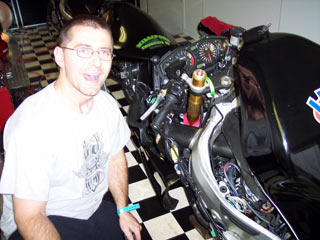