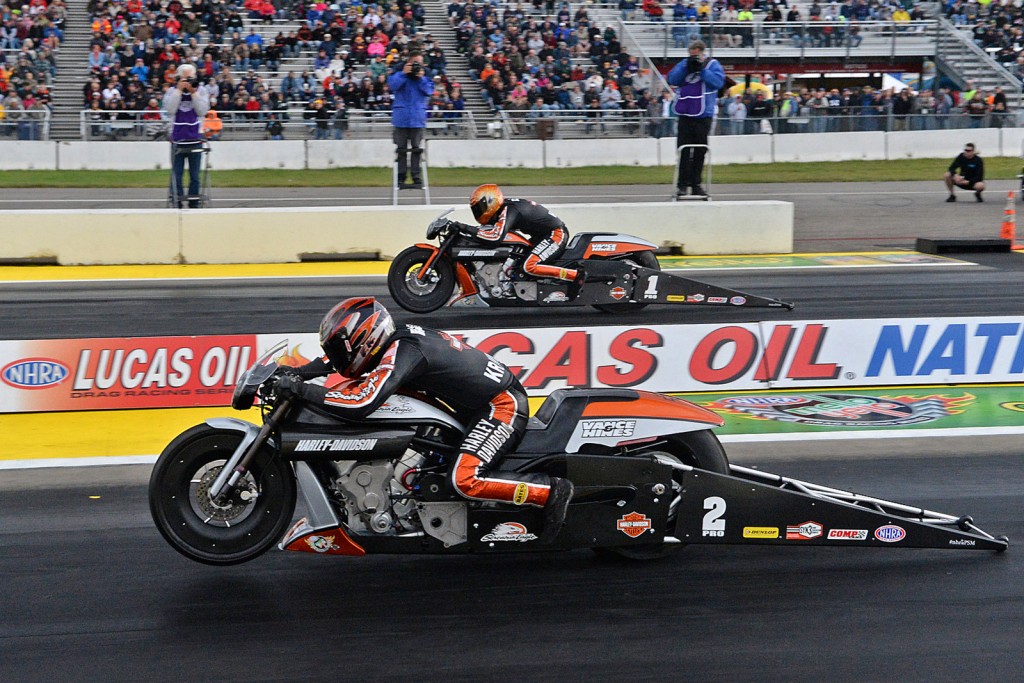 “The Harley-Davidson Screamin’ Eagle team and our V-Rod bikes are really in a groove right now,” said Krawiec. “The temperature dropped 20 degrees from Saturday to Sunday and we adjusted well. Our Harley engines love this cold air and I feel like we’ve got a good tune-up for any condition. We are ready to do some damage in Pro Stock Motorcycle as we head into the Countdown playoffs.”

Both Krawiec and Hines have qualified for the six-race Countdown to the Championship playoffs that begin September 18-20 at the NHRA North Carolina Nationals in Charlotte.

If Krawiec holds his points lead through the U.S. Nationals over Labor Day weekend, he will be the top seed for the Countdown. Following Brainerd, Krawiec leads the Pro Stock Motorcycle field with 824 points. Hector Arana Jr. is second with 658 points, followed close by Hines with 647 points.

Hines was the top qualifier at Brainerd, with a best Elapsed Time of 6.937 seconds. Krawiec was second in qualifying at 6.949 seconds.

In Sunday eliminations, Hines and Krawiec charged through the field to meet in the final, with Krawiec defeating three former Pro Stock Motorcycle champions in Hector Arana, LE Tonglet and Matt Smith in the elimination rounds and setting a new Pro Stock Motorcycle track ET record in the second round at 6.788 seconds. Hines had an open first round and defeated Karen Stoffer and Chaz Kennedy to reach the final. Krawiec beat Hines off the line and down the track in the final to secure the win.

“Any time there’s an all-Harley final it’s a great weekend for the team,” said Hines, the defending Pro Stock Motorcycle champion. “We are both in the Countdown playoffs, so we can go to the U.S. Nationals at Indy with no pressure.”