Team Spiderman put on a show at the AMA/Prostar finale that won’t soon be forgotten. 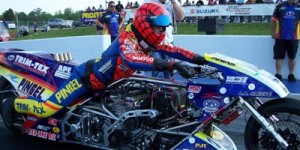 “It was an amazing end to an amazing season,” said McBride moments after defeating Brantley in the final with a pass of 5.99 to Brantley’s centerline foul.  “I have a great teammate who pushed me the entire year.  This is the kind of competition the class needs.”

Combined the duo produced an astounding nine five-second runs.  McBride’s worst pass of the weekend was a 6.02 – a number that has only been surpassed by McBride and Brantley.

Although Brantley, who finished No. 2 in the points, was unable to officially back-up the 5.800 within one-percent, the prestigious time ticket still entitles him to some serious bragging rights.  The run surpassed McBride’s record of 5.809 from Dinwiddie, VA, earlier this spring.

“It was such a strong pass,” Brantley said.  “It left really hard and just kept pulling.  I knew it was quick but I didn’t think it was going to be the quickest ever.  I give so much credit to Larry and the entire crew for making it happen.”

Crew chief Steve McBride, who tuned Brantley to a No. 1 plate last season, now lays claim to eight AMA/Prostar championships and added, “The air was superb and the track was so good I was tearing up tires all weekend.  We had it set up to run a number for Jimmy, but I was still shocked to see the 5.80 come up on the scoreboard.  He did an outstanding job.”

For McBride the championship comes on the heels of a season in which health complications nearly ended his career.

“It was humbling,” McBride said.  “I can’t tell you how much it means to be back out here with all of these great people and a great teammate like Jimmy.”

McBride and Brantley plan to follow the entire circuit next season.  McBride is hoping to add a few more names to the Top Fuel entry list in the near future.

McBride said, “We are very excited over the changes in Prostar and the fact that Bruce Sauer will be working as racing manager next year.  We hope to see this class continue to grow. We’d love to see an eight bike field at every race.”

Steve McBride said, “Larry and I will be busy finishing another customer’s bike this winter. We’re very excited for 2007.”

McBride went on to thank all of the dedicated sponsors that have supported the team over the year.