McBride on Dragbike Championship No. 7 – “This one is the sweetest.” 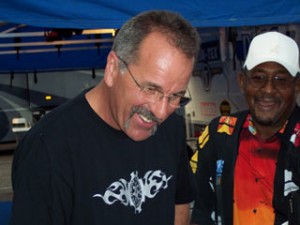 Along with the championship and the record run, the duo produced an astonishing nine runs in the five-second-zone.

For, McBride, an unprecedented seventh championship is cementing his place in the Motorsports Hall-of-Fame.  McBride has built a resume that could arguably rival even that of his late mentor and Top Fuel legend Elmer Trett.  Just don’t tell McBride.

“This one is for Elmer,” McBride said, dedicating the title to his comrade that passed away at the 1996 NHRA US Nationals.  “This one is by far the sweetest.  The first one was pretty sweet, but after all of the medical problems I’ve had and the uncertainly of my racing career, this one feels the best.”

McBride’s aforementioned health problems include his case of pancreatitis and a lacunar stroke in mid-2005 that broke up his five-year-reign as AMA/Prostar Top Fuel champion.  His ensuing hiatus paved the way for upstart Brantley to win his first championship.  In 2006, with McBride back up to strength, the teammates engaged in perhaps the most competitive Top Fuel title chase of the new millennium – something McBride says made the title even more gratifying.

“This one went right down to the wire with my own teammate,” McBride said.  “It was a true battle. He’s a great competitor and we didn’t hold anything back. We set both bikes up exactly the same.”

McBride loves the competition his teammate provides.  McBride has taken Brantley under his wing much like Trett mentored McBride in the eighties and early-nineties.

“I wanted to do for him what Elmer did for me,” McBride said.  “What’s cool is now I’m the guy everyone wants to beat.  For year’s it didn’t matter how good you were, Elmer was the man to beat.”