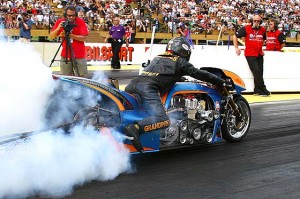 Following the rain affected home round at Santa Pod, the Gulf Oil – Grand Prix Originals team eagerly anticipated the first championship event at the new world class facility at Tierp in Sweden. Both the venue and the weather did not disappoint, scorching sunshine and an excellent race venue with all that the organisers had promised.

The team brought their Championship lead into the event knowing this would be their toughest test so far this season, taking on the high performing Kendall Racing team of Peter and Sören Svensson on their home track and without the benefit of having tested there a few weeks earlier. In addition the Gulf Oil – Grand Prix Originals machine is still in the early stages of development and with a tuning set up far from its full potential.

Nonetheless the team laid down an early marker with an off the trailer (and early clicked off) 6.698 secs @ 208.55 mph to take second qualifying position behind Svensson’s fine 6.0224 secs @ 211.84 mph. The former machine of King now ridden by Petri Paljakka of Finland followed up closely in third position with a 6.7039 secs @ 201.41 mph. 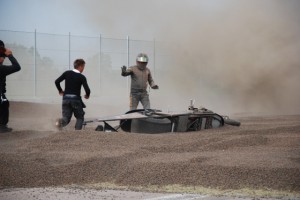 The team decided to make some developmental changes to the bike and sat out the second and final qualifying session of the day with new fuel and ignition settings it was hoped would improve the performance for the second day of qualifying. Despite some other teams joining the fray in this session the Gulf Oil – GPO machine maintained its 2nd qualifying position moving into day two.

The third qualifying session was bathed in glorious sunshine and the team eagerly awaited their turn to see what the changes would bring and were not disappointed with a lazy launch but best to date pass of 6.3602 secs @ 215.24 mph. However, disaster struck when King found himself unable to brake adequately on what seemed to be a slightly oily shutdown area and ran off the end of the track into the gravel, falling from the machine in the process.

Although King was relatively unhurt, the formerly pristine machine was not, with gravel, sand and dust particles in just about all open areas of 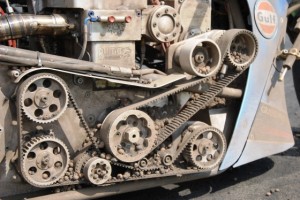 the machine. Although many believed this would be the last time the team would be seen out on track at this event the team was determined to make eliminations and set about the laborious task of stripping the machine down and cleaning the polluting debris away. And despite missing the fourth and final qualifier, the team’s morning run remained the second quickest (and the fastest overall) and they retained second position.

The team of Michael Beaumont, Marius van der Zijden, Gerard Willemse and King spent more than 14 hours working to return the machine to race ready state and although it was not cosmetically perfect it was certainly ready to take to competition. Kings first round opponent was another home favourite, Peter Andersson Ström. Despite Ström making the jump on King on the lights, King eased past the veteran, 6.3710 to a 7.6724 and into a semi final against former Champion Sverre Dahl from Norway. This time King ensured he maximized his stopping power by using his parachute for the very first time, thereby becoming the first European rider in UEM European Dragbike history to use such a device. 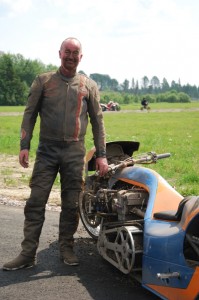 Dahl had lane choice over King courtesy of a marginally quicker time in the quarter final, but it was not enough to overcome the five time champion as King ran another best for the new machine of 6.3132 to defeat Dahl’s 6.4754 in what was a great race for the spectators. So, to the final and a chance to run against the number one qualified Svensson team but alas it was not to be when the team found that a tire had blistered in the semifinal, and a concern with slightly lower oil pressure readings that necessitated closer inspection would take too long to remedy to run in the time span demanded to be at the line for the final. However, the team left the new facility very happy after the trials of the weekend that would have seen many teams return home early.

Number two qualifier, runner up position in the race, a new best for the bike, and most importantly the team extended their points lead in the championship and look forward to the next and fourth round at Alastaro in Finland.

The team is extremely proud to be supported by many leaders in their chosen markets in their quest for an unprecedented sixth European Championship title: – APE – The world’s most innovative manufacturer of aftermarket parts for race bikes COMETIC GASKETS – The Premier Manufacturer of racing gaskets BELL HELMETS – The ultimate iconic helmet brand GATES – The world’s most trusted name in drive belts, hoses and hydraulics GOEDHALS – The name

Schweigert Leaves Topeka on a Roll