Schweigert Leaves Topeka on a Roll 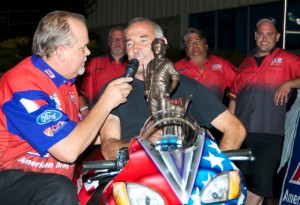 DTM builder/tuner Dan “The Man” Wagner had two horses at the top of the Topeka field. Schweigert qualified number 1 with a 4.16 with fellow DTM customer David Vantine second with a 4.18 on the Vantine Imaging Suzuki. Vantine lost when he spun in round 2 against Carlos Wilkerson, who went on to the final to face Schweigert.

After lining Schweigert up for the final, Wagner walked dejectedly from the starting line. The nitrous system on the Road End Farms Suzuki 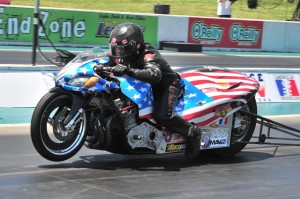 refused to purge, indicating a failure in the system. Sure enough, when the tree came down the bike slugged slowly away on motor alone. Schweigert sat up in the seat, his body language telling the story—telling that he hadn’t seen the winlight in his lane! Wilkerson, usually razor sharp on the tree, cut it a shave too close this time with a -.002 redlight.

And now Schweigert has an ADRL Minuteman trophy to keep his Arabian Racer trophy company, not to mention the sweet MIRock Christmas Tree he picked up in Maryland. Add to those the AMA Dragbike, SEMDRA and Canadian Motorcycle Drag Racing Association awards and you have a trophy cabinet at Schweigert’s house with hardware from every series he’s raced in. “I’ve wanted one of these for so long,” Schweigert said about the ADRL’s Minuteman. “We were fortunate in the finals, but we were ready to get this win. I felt like it was our time, and this is just an excellent feeling. I can’t thank my team enough—Dan Wagner, Kathie McGregor and Al Lash. Also thanks to all my sponsors— Schnitz Racing, Mickey Thompson Tires, Robinson Industries, and Worldwide Bearings.” 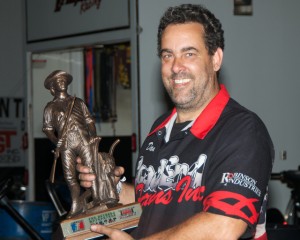 for more information about Terry Schweigert go to http://www.eatmyink.com/TerrySchweigert

find out more about the ADRL at http://www.adrl.us

Photos by Genie Muldoon http://www.tracksideimages.com
This report was prepared by Tim Hailey
Enjoy everything there is to read, see and watch about motorcycle drag racing and more at http://www.eatmyink.com

McBride Rained out in South Carolina