Hot Time in the Alabama Summertime 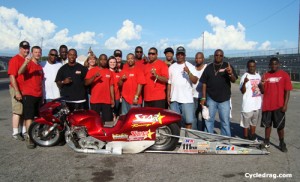 Despite sweltering heat and 150° track temperatures, the Star Racing/ Daytona Twin Tec, Pro Mod Suzuki beat the competition to win the Pro Mod class at the Lucky 7-11 Motor Cycle, 34th Annual “King of the Hill Showdown,” July 23-25. Steele, Alabama was the site of the event, and it was a testament of how much abuse a racer and his crew will endure in the challenge to be #1.

Mantez Thompson, of Decatur, Alabama, qualified 3rd with a 4.31 and piloted the motorcycle to the winner’s circle with consistent low 4.30’s during eliminations.

The Star crew consisted of George Bryce, Bobby Webb and Wayne Lay, who in spite of the extreme weather conditions, perspired their way to victory.

“Mantez drove the bike well and had great lights all four rounds,” said Bryce. “We were too hot to race – almost, but we had a great crowd and we had fun.”

“We enjoyed meeting a lot of the customers who buy race parts from us, and talking to friends that we haven’t seen in awhile,” said Jackie Bryce. “We want to thank everyone for their support of Star Racing and their commitment to the awesome sport of motorcycle drag racing

In 1980, George Bryce and his wife Jackie founded Star Racing to support the motorcycle drag racing community. Their high