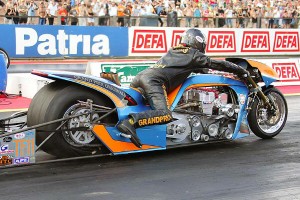 The Gulf Oil – Grand Prix Originals Top Fuel Bike team arrived at this year’s FHRA Nitro Nationals to be confronted by something of a tropical heatwave at the northernmost outpost on the UEM Drag Racing tour. Hot and humid conditions turned the track into a slick and tricky prospect, when it wasn’t drowning under the watery products of huge electrical storms that curtailed qualifying on the Friday and Saturday evenings. Mercifully the temperature and humidity dropped for eliminations, but these were considerably delayed whilst spares for the timing system were sourced after the Saturday evening lightning display had knocked out the power at the track and for some distance around.

Points leader Ian King qualified second behind Sverre Dahl’s 6.573 secs. @ 206 mph with a 6.626 @ 212 mph pass that had the Gulf Oil/Grand Prix Originals backed rider rolling off and on the throttle in order to overcome a seriously tricky track surface

However, in a shock quarter final both Dahl and King went out, the Norwegian rider suffering a broken camshaft drive and King with an uncharacteristic red light that saw the owner of King’s former machine Petri Paljakka through to the next round. To add to the team’s woe Paljakka had a relatively easy route through subsequent rounds to take his second consecutive Nitro Nationals win and to assume second place in the overall points standings behind championship leader King.

PSYCLEWORKZ – The UK’s best custom and race fabricators and innovators