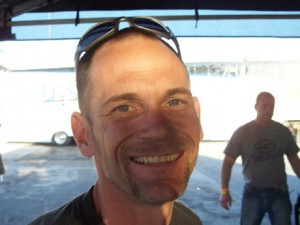 Don Schumacher announced that Chip Ellis will join the Don Schumacher Racing stable for the 2008 NHRA POWERade Drag Racing season in the ultra-competitive Pro Stock Motorcycle class. Ellis will begin his fourth full season in that category. The team, headed by crew chief Steve Tartaglia, will be sponsored by Schumacher Electric under a developmental relationship with Suzuki.

“This is an awesome opportunity and I’m grateful to Don Schumacher for providing it,” said Ellis, 37, who rode for G2 Motorsports from 2004 to 2007. “I’m really happy to be here and ride for such a great team. The DSR shop is quite the facility and Steve Tartaglia is very smart and I’m going to be working with a good bunch of guys. It’s hard to find the words to describe how excited I am.”

Tartaglia joined DSR as an engine builder and assistant crew chief shortly after the debut of the U.S Army Pro Stock Motorcycle team in 2003. He took over as crew chief for Angelle Sampey and Antron Brown in 2005 and has wrenched Brown and Sampey to a combined nine victories in 20 final-round appearances, a national elapsed time record for Sampey, and 13 No. 1 qualifying efforts, until the departure of the U.S. Army as a sponsor of their Suzukis at the end of 2007.

Ellis will also be working alongside new DSR crew members Jason Jones and Tom Patsis on fabrication and setup for a brand-new Suzuki, the first built in-house by DSR. He will be an integral member of the team in every aspect.

“I’m really excited about this year because I’m going to focus on making the bike go as fast as possible,” Ellis said. “I want to go all the way back to the true basics, which are how do I get this motorcycle to go fast and what am I going to do to accomplish that. I have a good plan in my head and I’m ready to go out and execute it.”

“I am thrilled that DSR will continue to compete in the exciting Pro Stock Motorcycle class in 2008,” said team owner Schumacher. “And having a rider of the caliber of Chip Ellis, Steve Tartaglia’s continuing outstanding input as the crew chief, along with a developmental relationship with Suzuki, I believe will give us an edge towards winning the championship in 2008. And, with the added support from Schumacher Electric, DSR should be able to provide the resources to accomplish that.”

Ellis, the 2002 AMA/Pro Star Funny Car Bike champion and the 2003 AMA/Pro Star Formula Super Bike champion, enjoyed a stellar year in 2007 in Pro Stock Motorcycle, reaching two final rounds and finishing the season in third place, just eight points shy of winning his first world championship. He also qualified in the top half of the field at all 16 PSM events and led the class with five No. 1 qualifying efforts. His season came down to a dramatic winner-take-all final round at the season-ending event in Pomona, Calif., against Matt Smith. Despite coming up short, Ellis is seeking to carry the momentum from his strong performance into his 2008 campaign for the Pro Stock Motorcycle title.

The NHRA POWERade Drag Racing Series Pro Stock Motorcycle schedule begins in Gainesville, Fla., at the NHRA ACDelco Gatornationals March 14-16. The schedule has also been expanded to include 17 races in 2008.

Up To Speed with George Bryce on Eventful Off-Season