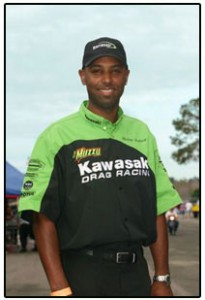 The AMA/Prostar National Finals marks the last race of the season for The Kawasaki/Adams Performance/Sportbike Zone team and the excitement and growth that has happened in Super Street can be largely credited to the simplicity of the class and the competitiveness of teams. With a battle coming to the National Finals the Kawasaki/Adams Performance/Sportbike Zone team is proud to be part of excitement in this class. This class will be a premier class in the future. Rickey Gadson is currently in Taipei, Taiwan hosting a television show about motorcycle life styles. His mind has not strayed from the task at hand at World Finals in Gainesville Fl. “We have been in this position before,” reminiscent of the 2001 world finals when riding the ZRX turbo charged machine in Streetbike Shootout. “We are a veteran team.” The Gadson/Adams duo has effectively shown record breaking performance under pressure. This very team won 11 races in a two-season stint when racing the class formally known as Streetbike Shootout.

The Kawasaki ZX14 that Team Kawasaki/Adams performance/Sportbike Zone is a first year production machine. This bike has taken the open class by storm, it garnered the best open class bike by Cycle World magazine. In a sea of race proven and developed bikes the ZX14 has turned into a class standout. The team has posted an impressive three race wins and two runner ups in six starts. 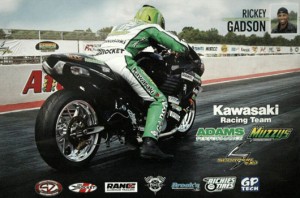 Every pass down the track with the ZX14 is history in the making. “We ran an 8.07 in testing prior to the Atco race and had a great combination on race day at Atco only to fight gremlins all day,” Gadson said. “We still posted the quickest et’s in almost every round.” The story book ending did not happen at Atco, but the team gained valuable race data in route to the runner up finish to Mike Slowe’s Suzuki/Velocity Turbo systems team. “I am proud of Mikey (Slowe) and what he has done with Barry’s (Henson) help this year”.

“The Kawasaki/Adams Performance/Sportbike Zone will bring several differently set-up bikes to Gainesville , including a bike that I heard through the rumor mill, will shock the class,” Gadson said. “I have to say the bike that we will be competing on in Gainesville will be a brand new combination, and more technically advanced than the bike we last ran at Atco”.  I asked Coby, “are you crazy? “Why mess with something that was working so well? He just smiled and said scared?”

The team has a new way to make power and predict stronger performance numbers . Gadson said, “We have a one point lead over the Suzuki/Velocity turbo systems team. We have to go one round farther than Mike Slowe to win the championship. We want to make more history for the ZX14.” The feat that this team has accomplished thus far is amazing. The bike is a strong platform from the factory. The challenge to this team is that they have to develop almost every performance part and still concentrate on winning the races. No small task. The Kawasaki /Adams Performance/Sportbike Zone are more focused than ever. Our team is hard at work. We will have a large operation at the AMA/Prostar National Finals. We will be
prepared. We are definitely ready for a challenge.”
Visit www.RickeyGadson.net for more information

About Team Kawasaki Dragracing – Multi time AMA/Prostar champion Rickey Gadson along with legendary tuner Coby Adams is on the cutting edge of development of Kawasaki sportbike drag racing. They have constantly set the performance bar in any given class. This team is the first to bring factory sponsorship to Motorcycle Drag racing. The team holds numerous records and has posted the quickest and fastest times of any Kawasaki street bikes in the world.