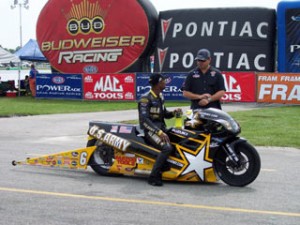 At mid-season it appeared as if 2006 would be the year Army Suzuki jockey and nine-year veteran Antron Brown claimed his first NHRA No. 1 plate.  When the smoke cleared at the final race in Pomona Brown fell a painstaking 23 points short of his goal and earned the second runner-up finish in the points of his career.  It was the fifth top-five of Brown’s storied history, but not what the determined and focused former motocross champion was after.  Brown says this year’s woes may have started in the wiring.

“We really started falling off with four races left. There was an electrical problem with the bike and it was taking power from the ignition,” Brown said. “We changed everything we could think of but we really didn’t solve the thing until our first off-season test session. It was hard to swallow because we were running so well and we had the points lead late in the year, which is all you can ask for, a chance to win, but we didn’t finish it off.”