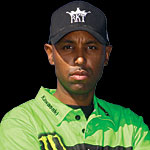 CP-Carrillo is proud to announce that we have signed a sponsorship agreement with Rickey Gadson–The most accomplished Professional Drag Racer in AMA Prostar Drag Racing history and nine time World Champion.

“We are excited about this partnership with Rickey Gadson,” stated CP-Carrillo’s Cindy Verkooij, “In addition to being a well known accomplished racer, being part of Rickey’s team is an ideal proving ground for our piston and rod racing technology.”  New skirt shapes that we’ve developed have introduced the most stable piston available, Verkooij adds, which translates into better ring seal and reduced harmonics in the bore.  Along with a fully machined Carrillo rod, this rotating assembly represents the highest in quality, durability and engineering that many of the top racers come to expect from CP-Carrillo.  With Rickey’s accomplishments and CP-Carrillo’s advancements in technology, this relationship will set the bar even higher with respect to performance, quality and professionalism in the industry.

From Concept to Winner's Cirlce