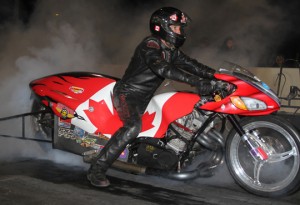 Canadian Terry “Milkman” Schweigert and the DTM Performance team take to the track for the Arabian Drag Racing League’s “Battle for the Belts” with the Pro Extreme Motorcycle regular season points championship in hand. That earned the team the all-important first round bye, meaning they only need to win 2 rounds of competition to claim the US$50,000 Belt at Doha’s Qatar Racing Club.

Schweigert took the opening round win of the 2010/11 season in what’s turned out to be a class of amazing parity. Five different riders have claimed wins in seven Pro Extreme Motorcycle races. But Schweigert’s consistent riding and Dan “The Man” Wagner’s number one qualifying and record setting tune-ups have put team in the catbird’s seat.

“It’s been a great experience racing over here in Qatar, but it’s also been a lot of hard work,” said Schweigert. “But now is the time to make it pay off. The field is so tough, and whoever earns the Belt this weekend will have surely earned it.”

You can watch Terry and all the Arabian Drag Racing League competition live via the Breaking News section at http://www.eatmyink.com/