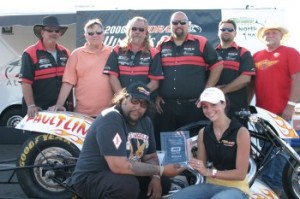 After coming off his motorcycle at the AHDRA Bikeweek Nationals in Phoenix, Ariz. on April 2nd, Cycledrag.com is pleased to report that veteran Nitro Harley racer “Chicago” Joe has been released from the hospital and is resting comfortably at his home.

The crash occurred in the Barnett Clutch Outlaw class, which is similar to a first and second round losers bracket competition for nitro racers.

Following the accident Joe was alert but complaining of shoulder pain and suffering from road rash.  He was air lifted from the track.