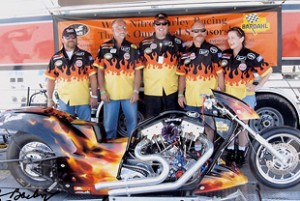 2006 West Coast Pro Fuel champion John Breckenridge was eager for a trip to the winner’s circle after being defeated by Jay Turner in the Gainesville final a month prior.

“I’m very happy. We’re trying out a new motor and my crew chief Dean caught on to the combination really quick,” said Breckenridge, who’s career best is a 6.54.  “We struggled a bit on Saturday but had it figured out by Sunday.”

Breckenridge defeated his rival Armon Furr in the semis with a rapid pass of 6.69 to Furr’s wounded 8.17. Just don’t ask him how.

“It was a big win over Armon.  He has really been our arch nemesis,” Breckenridge said.  “I’d tell you what kind of tune-up we had in it, but every time I ask my crew what they are doing to the bike they tell me not to talk. I’m just the monkey that twists the throttle.”

That set the stage for a rematch from the Gainesville final, only this time it was Breckenridge who had the performance advantage and lane choice over Turner.

“Having lane choice helped.  We had a little edge on him because he had been smoking the tire throughout the day,” Breckenridge said.  “But I knew Jay would be tough.  He’s a great racer and I have a lot of respect for him.”

In a crowd pleasing side-by-side final Breckenridge held off turner with a 6.67 to Turner’s 6.77.

“It was a good neck and neck race,” Breckenridge said.  “This is a great way to start the season.”