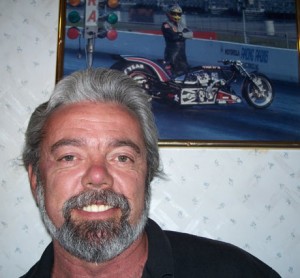 Tommy Smith is exactly the type of rider the anemic import Top Fuel motorcycle class is crying out for.  He’s got over 27 years of motorcycle drag racing experience and machinery formerly owned and ridden by a legend.  So what’s holding him back?

After years of racing in the Funny Bike category, Tommy Smith, 50, of Birmingham, Ala. burst onto the import Top Fuel scene in 1999 after purchasing one of the late-Elmer Trett’s legendary Mountain Magic motorcycles.

“We had been playing with nitro in the Funny Bike class and Jackie Trett approached me about buying it,” Smith said.  “I couldn’t resist.  I was a big fan of Elmer.” 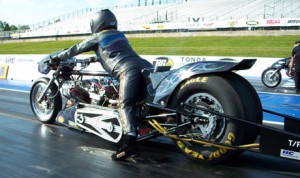 Smith enjoyed success on the classic machine by picking up a pair of AMA/Prostar event victories and lowering his personal best elapsed-time to a stellar 6.19.  However as of late Smith has struggled to regain his consistency and forward momentum.  In fact, over the last three seasons Smith is without a win and has missed more races than he has attended. 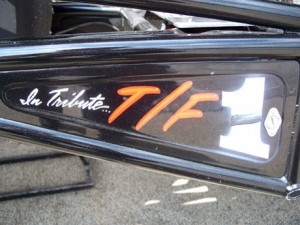 With only a handful of Top Fuel Motorcycles in the country often times only two or three show up at the races. The class as a whole is in dyer need of riders like Smith.

So what has been the hindrance?  Smith says trying to keep up with the rigorous maintenance the bike demands, while also trying to update his equipment to keep with the times has been overwhelming. 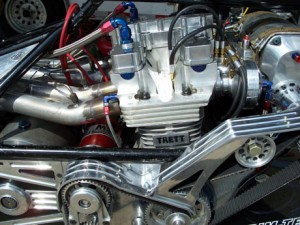 “Three years ago in Dinwiddie we blew a motor up and it took us a year and a half to rebuild it because we changed so many things,” Smith said.  “We saw a lot of potential in the bike and decided to run with it.  We changed the fuel system and the location of the motor.”

In the early 1990s Smith’s bike was considered cutting edge.  At that time Elmer Trett seemed to be light-years ahead of his colleagues and routinely led the field with rapid 6.60s.  However much has changed since then and Smith must now contend with the vast knowledge and talent of Trett’s protégé, seven-time AMA/Prostar champion Larry “Spiderman” McBride. 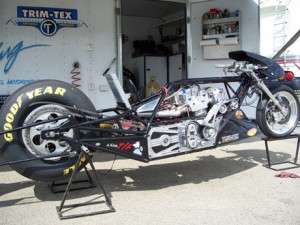 “Elmer was ahead of his time but now we have a lot more technology than Elmer had. We must make some changes to keep up with the times,” Smith said. “We don’t have the same parts and pieces as McBride. We are still running a cylinder head that was designed 20 years ago. We also have a smaller blower, so we definitely have some catching up to do.”

Smith has stood firm by his fundamental knowledge of engines to lower the bike’s elapsed times. He asserts his powerplant is nothing more than an air pump. Despite the older components Smith feels like the bike can be competitive if he can consistently get it down the racetrack. 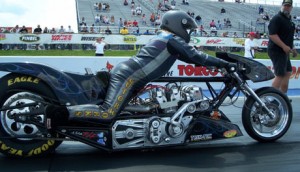 “We still feel like this bike is plenty capable, we’ve just been bit by a whole lot of 50 cent parts,” Smith said.  “Since we changed the clutch and the fuel system it has been really difficult to make it down the track.  We know it has a lot of potential, it’s just a matter of figuring it out.”

However therein lies one of Smith’s, and other Top Fuel motorcycle riders’, biggest obstacles – time.  Unlike most of his Top Fuel counterparts that race on four wheels Smith’s operation is without a major sponsor and is ran more as a hobby. Smith owns a flooring company which consumes most of his time.

“Usually we work all week on the business and Saturday is reserved for working on the bike,” Smith said.  “The time it takes to maintain one of these bikes is the hardest part. It’s no so much what you have to do at the track, it’s what you have to do to get to the track. In between races you have to pull the motor and replace the bearings and springs. It’s a lot of work.”

Combine that with expensive racing components, rising fuel prices and a limited amount of financial incentives available for the class and a rider like Smith can find himself out of funds very quickly.

Despite the setbacks and lack of time Smith is hopeful that he can raise his game and once again become a major player in the class.  For the sake of the category, Top Fuel Motorcycle fans and Smith’s fellow racers sure hope he’s right.