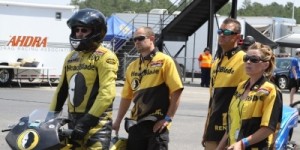 Capone Racing, Team HeadBlade and Bammer Racing are leaving this evening for Numidia, PA to begin their final assault on Championship points at the Numidia Raceway for the Liberty Nitro Nationals Presented by Vreeland’s Harley-Davidson. With only two more events after this weekend, these teams are focusing on the GOAL–Championships.

The AHDRA points have been tabulated after the Woodburn race and going into Numidia, Frank Capone who began the season a little late in the Rush Pro Gas class has dazzled the points board by sliding into a comfortable 3rd place and only 17 points off the #1 position. The question is, will he have the oomph to move into 1st place by No Problem Dragway, LA for the finals?

Capone and Reno are #’s 1 and 3 respectively in Pro Mod. What a season it’s been so far in a very competitive field.

Bammer Racing’s Drums Brancaccio remains in the top ten of the AHDRA Screamin’ Eagle Top Fuel class.  It’s been a short season for Brancaccio this year, but there is a good chance for a top five finish.