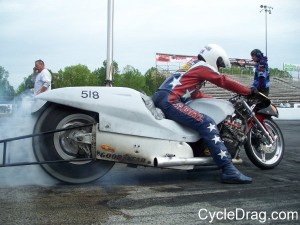 Rockingham Dragway has added a special qualifying session for Mickey Thompson Tires Pro Mod motorcycles during the sixteenth annual Schnitz Racing Summer Sizzler, Aug. 12-14. In addition to pro qualifying sessions at 1 pm, 4 pm and 7 pm on Saturday, Pro Mods will have a “last chance” to qualify for the MIRock Superbike Series event at noon on Sunday. This extra session gives racers competing in the ADRL event at nearby Virginia Motorsports Park on Saturday a chance to double-up on the weekend and take home the MIRock purse on Sunday.

Furthermore, qualified riders in Orient Express Pro Street and DME Real Street will get one Sunday shakedown run at 9:30 am, along with a shakedown run for the Pro Mods. Eliminations begin at 12 noon on Sunday for Pro Street and Real Street, with first round of Pro Mod run in conjunction with round 2 of the Pro’s at approximately 2 pm.

Electric Motorcycles - The Future of Racing?