Star Racing Heads to Vegas and Pomona with Chaz and Angelle

Star Racing will head west with Rookie of the Year candidate Chaz Kennedy and three time NHRA Pro Stock Motorcycle World Champion Angelle Sampey. They had not planned on attending Las Vegas or Pomona but one of Star’s long-time customers and partners stepped up to the plate. UPI Performance, a high performance V-Twin shop out of Ashland, OH, has made the last two races of the 2014 NHRA Mello Yello Drag Racing Tour a reality 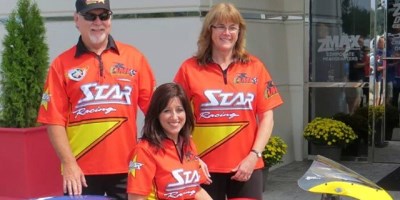 “We are truly proud to be associated with Star Racing and to be a part of their team,” said Scott and Jo Smalley of UPI Performance. “We have had a long relationship with George and Jackie Bryce and are grateful for their friendship. Being able to help rising star Chaz Kennedy and 3-time champ Angelle Sampey continue the momentum we have gained over the last three races should bring big dividends to the 2015 season.”

“I want thank Scott and Jo for their continued support and confidence they have in me, “said Kennedy. “I feel like I have made great strides as a racer over the last few months and can’t wait to travel to Vegas and Pomona and perhaps pick up my first Wally.”
Star Racing brought 3-time NHRA Pro Stock Motorcycle World Champion Angelle back to her love of racing after retiring to have a family and the 41 time winner feels she is getting better with each run.

“I knew that it would take me a few races to get comfortable again,” exclaimed Angelle. “With UPI Performance making Vegas and Pomona happen, it will bring me closer to getting back to winning rounds then hopefully winning races.”
Star Racing will be celebrating its 35th Anniversary in 2015 and the Americus, GA based team is excited about the future. “We have such a great core of loyal partners, “added George Bryce. “I want to thank UPI Performance, High Performance Lubricants and Rodney, from Spring and Associates, for their continued support. There are exciting things happening at Star and we are focusing on finding a marketing partner for our team so that we can compete for a championship in 2015 while we celebrate our 35th Anniversary Tour.”

Krawiec has Team Approach in Mind for NHRA Toyota Nationals