Slowe Wins on his Old Playground 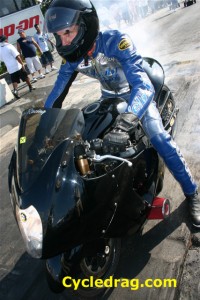 Demito, on a four race win streak, was running deadly consistent low 7.80s on the hot and slippery, 138 degree, southern Maryland track. But the normally unflappable Demito blipped a -.003 redlight against Dimey Eddinger in round 2. Jackman’s day also ended in round 2 in a close race with former Heavyweight champ John Kulcycki. Kulcycki came out on the wrong side of a close one against Slowe in the semi, while Eddinger should have paid more attention to his winlight in the round against Demito. The race well in hand, Eddinger kept the throttle pinned anyway and sprayed his Suzuki Hayabusa motor all over the top end. That gave Navarro a solo pass in the other semi, and he took the opportunity to gain lane choice by a tenth over Slowe in the final.

Navarro runs the Magneti-Marelli system that replaces the factory electronics on his turbocharged ‘Busa, while Slowe’s mothballed ‘Busa runs the old “piggyback” system. But Slowe finally got the limited system all dialed in for the final, running a 7.81 to beat Navarro’s 8.01.

Slowe also gained fame by beating MIR event director Jason Miller in an episode of Speed Channel’s “Pinks”.  At the WPGC Bike Fest, MIR announced that the track will be the stage for two motorcycle themed pilot shows developed by “Pinks” host Rich Christensen during the MiRock round in October.

HTP Performance True Street remains the current action class, and the top players from the June race were still tops in July. Despite the heat, Keith Thompson qualified number one with a record setting 8.13 on his HTP prepped GSXR1000. Running a little slower on raceday, Thompson beat Rickey Grayson with an 8.30 in the semi, while Norman Jackson beat Rickey Gadson’s spinning Kawasaki ZX14 in the other semi. Thompson beat his former K&N Motorsports teammate Jackson in the final.

McBride Overcomes Engine Explosion To Win Third of the Year