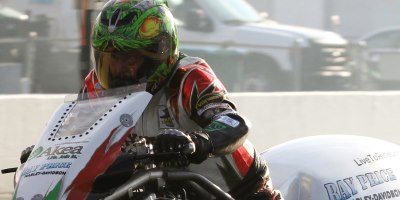 Whenever Ray Price Racing brings the 1,000 horsepower Top Fuel Harley Akea Express, the crowds are always in for the ride-of-their-lives. And at the NHRA Mello Yellow Drag Racing Series event at Bristol Dragway, the team certainly did just that with a win in the finals.
With weather and track conditions just right, the Akea/Ray Price sponsored dragbike put down a solid run in round one of qualifying on Friday with a 6.380 ET at 226.81 MPH putting them in the number three spot. In round two Grimes with a clean pass road the drag bike to a 6.318 ET at 221.82 MPH to move up to the number two qualifying spot. Then in the final round of qualifying, Ray Price Racing went for the number one qualifying spot, but Grimes looses traction early in the run and backs off the throttle, yet still manages to hold onto the number two qualifying spot going into Sunday’s eliminations.
“With temperatures forecasted to be in the 90’s, the track conditions will be tricky, but the team will tune the Akea Express so it is ready for eliminations”, commented Ray Price at the end of qualifying on Saturday.
During first round of eliminations on Sunday, Grimes with a quick reaction time over Mike Pelrine, gave him the starting line advantage and never trailed for the win, running a 6.403 ET at 223.65 MPH.
Round two of eliminations Grimes faced Joey Sternotti, and again twisted the throttle for a quicker reaction time, and rode the drag bike straight down the groove through the finish line putting the team into the finals.
In the finals, Grimes faced Damian Cownden, Grimes had a slight starting line advantage and carried the front tire until past half-track before setting it down and going through the finish line with a 6.413 ET at 221.45 MPH to capture the teams third win in the NHRA Harley-Davidson Drag Racing series. The two riders gave the fans an exciting, but very close, drag race with a margin of victory of only 0.0472 seconds!
“This totally was a team effort and I am proud of everyone, especially when you can win in your own backyard”, said Ray Price.
The team will now prepare for their next NHRA Lucas Oil Drag Racing Series event July 18 – 20 at National Trails Raceway in Hebron, OH.
The Ray Price Motorsports team sends sincere thanks to all their sponsors for their support for the 2014 race season. They include our Primary Sponsors: Akea, Ray Price Harley-Davidson, with special thanks to our Associate Sponsor Raleigh H. O. G. and our Support Sponsors: Vanson Leathers, PJ1 Products, RC Components, Nationwide Insurance, CP Pistons, Royal Purple, Barnett Clutches & Cables, Autolite Sparkplugs, Mickey Thompson Tires, Gates Belts, Brown and Miller Racing Solutions, JIMS USA, Industrial Machine Solutions and Wiley X. Additional thanks: Bill Hayes, Hargis Consulting, Ultra Pro Machining and Freddie Robbins.
Ray Price Harley-Davidson – Raleigh, NC – www.rayprice.com