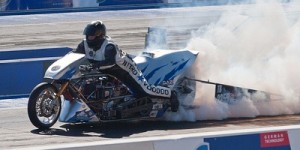 Matheson’s dominant run in the Championship continued, taking out Top Qualifier with Lowest ET and MPH for the final Round.

Matheson has won all 15 races of the season held across Australia over the 5 round Pro-Series format.  Matheson amassed some 635.5 points out of a total being offered of 649 (98%) throughout the season, with a lead of 275.5 points ahead of his nearest rival Chris Porter of Bad Bones Racing.

Matheson has a staggering win rate of more than 95% in a three year career in the explosive Top Fuel Motorcycle Championships.

Matheson has re-written the Record Books, winning three from three Championships from a rookie start and set new records across Australian in his quest to win.

Matheson said “I’m the trigger guy, the Team deserves the credit, as without them, the bike is just a pile of nuts and bolts.  Roger Bloor, my Crew Chief, Bruce McGonnell, Graeme Turner and recent newcomer Troy Thompson are freaks, they can fix anything I break and can solve the problems we face racing different tracks in varying conditions.

These Bikes are absolute weapons and in the right hands, with a sensible Team approach they can be consistently fast race machines.

We spend a lot of time away from the track, working through set ups and ensuring we are 100% prepared to race on race day and able to deal with any curve balls thrown at us.

Our results underline our commitment to the challenge, our sport, the sponsors and most importantly to each other within the Team.

The Fuchs Winternationals was a great event and a credit to the Track, Staff, Officials and the dedicated people who made it happen.

The promotion of the event was second to none, with numerous publicity events in the build up to the event.

Despite the challenging weather “Rain” the track was catching a lot of Teams out with the amount of traction.  Despite the grey skies, the crowds were great with many passionate die hards coming out on Tuesday to see the finals run after rain interrupted the event the day before.

The future is bright in the sport and the new season calendar gives the Teams plenty of rounds Australia wide.

Matheson still faces the challenge to break into the five second zone, being the first Motorcycle rider to achieve this in Australia.

Matheson holds the current Record of 6.058 set at Willowbank in 2010 and is still poised to crak into the zone.

Matheson said “we all have goals and that’s one now towards the top of my list.  We have made a lot of progress with the Bike in a relatively short time and hope to continue with our success in the new season.

As always, we would like to thank our Sponsors & Supporters: