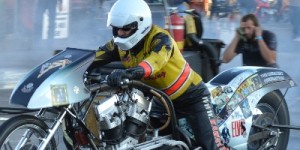 On Tuesday prior to the AMRA final event of the year, the crew of Hawaya Racing headed to “the Rock” in preparation for the Fall Nitro Bike School. 9 riders and 4 crew chief/members attended the school, including 1 female rider, 1 rider from Canada, 1 from England and 1 from Australia. The weather forecast was questionable for the entire week, but everyone was excited about the class. The rain held off for the school and the race as well, but a gloomily forecast kept the spectator count down on Sunday. The two Hawaya Racing prepared Derringer powered Pro Dragsters made nearly 50 passes each during the school and the AMRA event and performed perfectly through out the entire week. We only had one hiccup when one of the riders did a peddle job during the 330’ passes and banged a motor, causing the crew members a bit more work to replace a piston and rod. But they had it repaired in no time and we were back in business. By the end of the class, the crew members were doing all of the turn-arounds on the bikes for their riders. 7 out of 9 unlicensed riders passed the class and received their AMRA license. 3 of those riders (Wayne McGuinness of Australia, Preston Bartlett, and Tyler Wilson) went on to qualify and compete in the AMRA finals. Wayne McGuinness competed on his newly completed Derringer powered Pro Dragster qualifying in the #3 spot, Preston was in the top half of the ladder at 8th, and Tyler sat in the 5th spot.

We would like to thank all the pilots and crew/chief members for making the Nitro Bike School a success. Their tenacity, fearlessness and overall enthusiasm for the sport and support of each other paved the path, leading to a great experience for all!! We would like to also give a big pat on the back to Mani Georgoulis from Canada, who after struggling early on, came back to set the Nitro Bike School ET record at 7.70 seconds to receive his license. And to Stacey Bortz, our third female pilot to receive her fuel license.

THE AMRA JIM McCLURE NITRO NATIONALS RACE:
In a word, WOW! What a race. If you were not there, you missed out. In attendance was the largest Nitro bike field in many years. 13 of the 16 Pro Fuelers that showed up to compete were Derringer powered and ready to fight for the 16 spots in the AMRA’s final event of the year . Tyler Wilson riding the #1 school bike took out Kevin Garrow, Preston faced Kirby on Dale Nilles bike and lost on a hole shot, and Wayne defeated Jay Beasley on Bobby Hoovers ride and Rebel was stomping the field running in the 7.30’s all weekend long, defeating Kenny Little in the first round. In the second round, Tyler took out John Esenwien, Rebel took out Pete Stimeling and Rich Vreeland advanced by defeating Wayne McGuinness. In the third round of competition, Rich got around Rebel when he busted the chain just off the starting line and Tyler smoked the tire out about 100 feet against Rocky. The finals were all you could ask for as the two HRP built Pro Fuelers faced off against each other. Rich went 7.48 seconds, just getting squeaked out by Rocky’s 7.47 in a great side by side final in Pro Fuel. 230 bike entries in all with Top Fuel and Nitro Funny bike well represented as well.

On November 8, 9, 10, the Pro Dragsters head to Bradenton Florida for the Manufactures Cup race. All AMRA/NHRA legal Pro Dragsters are welcome to compete in the Pro Dragster class presented by Hawaya Racing. This race track was just resurfaced this summer and times will be very quick. The Man Cup has added a Top Fuel Twin class for this event and many European teams are attending.

Quickest Dragbike Run Ever - Peter Svensson Number 1 With a Bullet