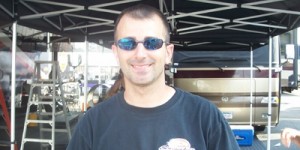 Harley-Davidson® Screamin’ Eagle®/Vance & Hines rider Eddie Krawiec opened the 2011 NHRA Full Throttle Series Pro Stock Motorcycle drag racing season with a victory at the 42nd annual Tire Kingdom NHRA Gatornationals at Gainesville Raceway. Krawiec, who also won at Gainesville in 2010, posted the quickest elapsed time of Sunday eliminations in round three with a 6.825-second pass at 198.85 mph on a Harley-Davidson® V-Rod®, and won the final when Geico Suzuki rider Karen Stoffer fouled at the start.

“This track had some killer conditions, it was meant to go fast,” said Krawiec. “My V-Rod was very consistent all weekend and I just came to the line feeling very comfortable every round. I felt zero pressure today.”

Krawiec was the second-fastest qualifier for the event with a 6.788-second ET in the first round on Friday, and also set a new national class record for top speed at 199.26 mph. Krawiec was bettered only by Lucas Oil Buell rider Hector Arana, who opened qualifying with a 6.777 run that reset the Pro Stock Motorcycle national ET record of 6.811 seconds set by Krawiec at Pomona in November, 2010. Harley-Davidson® Screamin’ Eagle®/Vance & Hines rider Andrew Hines used a 6.826-second pass in the second round on Friday to qualify third.

In Sunday eliminations, Hines won his opening round match with Suzuki rider Steve Johnson, but lost in round two to Nitrofish Suzuki rider LE Tonglet, who used a 0.020 reaction time and 6.825 ET to beat the 0.029/6.852 effort of Hines.

“After three days of testing last week, and then the performance of these Harley-Davidson Screamin’ Eagle bikes at Gainesville, I can say we’ve had a successful off-season,” said Hines. “I had a great bike today, and had the bad luck to run into the defending champion on his best run of the weekend. That race between me and Tonglet may go have been one of the quickest combined times in history.”

Krawiec opened with a win over Suzuki rider Katie Sullivan in round one, and got a pass in round two when SAF/Motorcycle Specialties rider Gerald Savoie fouled at the start. In the semi-final round, Krawiec used that blistering 6.825-second pass to defeat Tonglet, the defending series champion, who ran 6.861.  Krawiec then advanced to his 20th career final round and secured his eighth career event win when Stoffer left the line just 0.002 seconds early.

“The third-round match with Tonglet was just great racing,” said Krawiec. “There will be no gimmee rounds this season. The level of competition is up a little, and there are a lot of racers out here that can run 6.8s. If we stay consistent and make good passes every round we’ll get our wins this year.”

Krawiec opens the season leading the Pro Stock Motorcycle division in points with 124. Arana, who lost to Stoffer in round three, is second with 104 points. Stoffer is third with 100 points, followed by Tonglet with 74 points and Hines with 62.

The Pro Stock Motorcycles will next race April 29 – May 1 at the O’Reilly Auto Parts NHRA Spring Nationals at Royal Purple Raceway in Baytown, Texas.