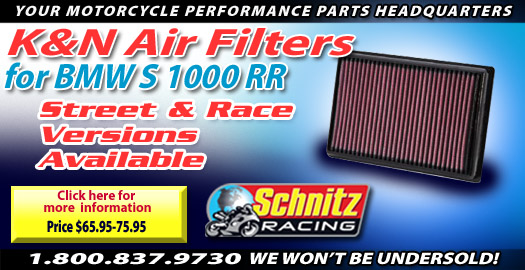 This bike is comparable to the highly acclaimed R1, CBR, GSXR, and ZX 1000; although some may argue that this bike is now superior to all of its Japanese counterparts. BMW 1000 models were made last year to satisfy world superbike requirements for racing but this is the first official year it has been made available to the public. It offers features like traction control and 179.2 horsepower at the rear wheel.

K&N’s 1011-2323 air filter is warranted against defective workmanship for one year after the date of purchase with no mileage limitation. This K&N air filter is not intended for dirt track, off-road, or highway use. Its two ply cotton media is designed to be less restrictive, providing a better racing advantage. It’s proudly made in the USA and ready to help give you that edge against your competition.

Schweigert Wins Round No. 1 in Qatar