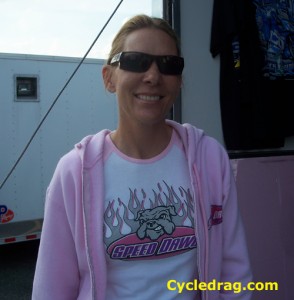 In Pro Stock Motorcycle, Karen Stoffer defeated three-time world champ Eddie Krawiec in the final with a 6.900 at 195.11 on her Suzuki Extended Protection Suzuki to claim her second victory at this event. Appearing in her first race since Indianapolis in 2013, Stoffer defeated Steve Johnson, Angie Smith, and Shawn Gann en route to the final. The win was Stoffer’s first since Denver in 2011 and her seventh overall.

“We had a lot of heart and a lot of passion,” Stoffer said. “We don’t have a big budget, but we certainly have a big heart. We certainly tried to get some high performance out of it, and we were able to do it. The boys worked hard, worked till about midnight each night and gave us a good bike on Sunday.”

Angelle Sampey Takes Pole at Day No. 1 of Gatornationals