Angelle Sampey Takes Pole at Day No. 1 of Gatornationals 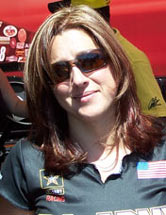 Three-time Pro Stock Motorcycle world champ Angelle Sampey set the pace in the two-wheel class with a run of 6.891 at 192.44 on the Star Racing Buell. Sampey, who had off-season surgery to repair an ankle injury from Las Vegas last October, will be going for a fourth No. 1 qualifier in Gainesville and 46th overall.

“Over the off-season, I think the ankle injury actually was a blessing in disguise,” said Sampey, who rejoined the NHRA Mello Yello Drag Racing Series tour in St. Louis last September after a six-year absence. “It really made me work hard over the off-season to improve mentally and physically.”

Karen Stoffer, who last raced in Indianapolis in 2013, qualified No. 2 on Friday with a 6.904 at 193.18 on her Stoffer Enterprises Suzuki. Defending world champ Andrew Hines drove his Screamin’ Eagle Vance & Hines Harley-Davidson to a 6.905, 192.91 putting him in the third provisional position.

Angelle Sampey Ready for Gatornationals, After Five Months of Rehabilitation