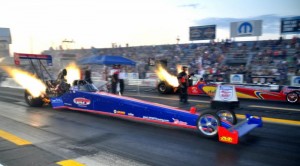 Race fans looking for the ultimate drag racing getaway need to look no further than the Grand Bend Motorplex in Grand Bend, Ontario this Friday, Saturday and Sunday.

Located just a few miles from the picturesque resort town on the shores of Lake Huron, the Grand Bend Motorplex offers all the amenities race fans could ever want – from good food to great racing – all on display during one of Canada’s premier motorsports events at the IHRA Mopar Nitro Jam Nationals during a new weekend – June 20-22.

And this year, race fans can expect one of the biggest IHRA events in the history of the Motorplex.

Already one of the biggest drag racing events in all of Canada, the 2014 edition will feature a full contingent of sportsman competition plus an all-new lineup as part of the IHRA’s new Nitro Jam Drag Racing Series. Ontario fans will witness seven professional classes, plus hundreds of regional competitors making for one of the largest events in the history of this event.

“Grand Bend has long been a hot spot for great racing with the International Hot Rod Association. This year, we are pleased to up the ante even more with our all-new Nitro Jam Drag Racing Series lineup, plus the return of Top Fuel Dragsters, Pro Mods and more making for a truly unique event on the 2014 IHRA schedule,” said Scott Gardner, President of IHRA Motorsports. “The IHRA Mopar Nitro Jam Nationals has always been a spectacle and we want to make sure that continues.”

Fans will enjoy over two dozen nitro-powered race machines and a return to qualified fields and championship drag racing as GBM hosts competition in Nitro Funny Car, Nitro Harley and Nitro Altered, plus the much-anticipated return of 320 mph, 10,000 horsepower Top Fuel Dragsters. The 2014 IHRA Mopar Nitro Jam Nationals will also include traditional competition in Pro Modified with the PMRA circuit and Mountain Motor Pro Stock, plus the popular Larsen Motorsports all-female Jet Dragster team made up of the fastest women in racing.

And it will all take place on the grand stage set by Grand Bend.

Californian Jason Rupert currently leads the Nitro Funny Car championship in the Bays and Rupert “Black Plague” ’69 Camaro, however the three-time winner in 2014 failed to qualify for the IHRA’s most recent race leaving Rupert looking to rebound this weekend. He will be joined by “Mr. Explosive” Mark Sanders, Tim Boychuk in “Forever Forward,” Mike McIntire Jr. in “McAttack,” Bruce Litton in the “U.S. Male” Vega, Ronny Young in the world famous “Blue Max” and more.

Nitro Fans will also enjoy the return of 320 mph Top Fuel Dragsters as Canadian Ike Maier battles American Kyle Wurtzel in a nitro-powered battle of the U.S. versus Canada.

In addition to the nitro action, Grand Bend will also host the wild PMRA Pro Modified circuit, as well as a special showdown in Mountain Motor Pro Stock. IHRA’s most recent race winner in Pro Stock, Canadian John Konigshofer, will be on hand to battle a unique field and celebrate his first win with the IHRA.

In addition to all of the on-track action, the 2014 IHRA Mopar Nitro Jam Nationals will feature an all-new and fully interactive Fan Fest pit experience. Fans can tour the pits, meet the drivers and take part in a number of fun family activities including the Larsen Motorsports Jet Technology Center, a hands-on look at the design and technology behind a jet-powered racing team, and the Hollywood Cars of the Stars featuring real cars from famous movies and television shows such as the General Lee from Dukes of Hazzard, the DeLorean from Back to the Future, the Batmobile from the 1960s Batman television series and more.

In addition to the professional action, the Mopar Nationals will also two full days of sportsman racing competing on the IHRA’s Summit Racing Equipment Pro-Am Tour presented by AMSOIL. Racing for that series will take place Saturday and Sunday.

Tickets to the 2014 Mopar Nitro Jam Nationals can be purchased in advance at www.nitrojam.com or at the gate day of show.

The Race to the Pro Street Dragbike 6.80-Zone at a Crescendo