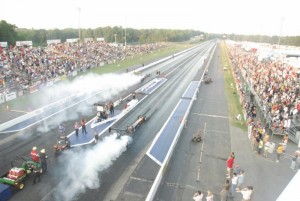 After a three-year hiatus, the International Hot Rod Association is thrilled to welcome the return of the historical President’s Cup Nationals at Maryland International Raceway as the Nitro Jam Drag Racing Series returns to the track the of weekend of June 13-14.

“One of the longest tenured events in the history of the IHRA is Maryland International Raceway’s President’s Cup and we are very excited to bring this amazing race back to fans in southern Maryland,” said Skooter Peaco, Vice President of IHRA Motorsports. “The all-new Nitro Jam Drag Racing Series is packed full of entertainment and great competition as we bring in classes unique to this series. We very much look forward to returning to the tradition and excellence of this great event once again in 2014.”

The 2014 President’s Cup Nationals will include competition in a number of classes unique to the International Hot Rod Association and its Nitro Jam Drag Racing Series. Fans will enjoy championship competition in three nitro classes plus the world’s first Jet Dragster championship and the much anticipated return of Mountain Motor Pro Stock as drivers from across North America compete for points in the year-long battle for the Nitro Jam Drag Racing Series championships.

“We are thrilled to have nitro racing and the President’s Cup back at MIR,” said Royce Miller, President of Maryland International Raceway. “The new Friday and Saturday night format is very fan and family friendly and will be an awesome experience for everyone. The Miller family will be on the starting line to celebrate the return of the President’s Cup when the first nitro qualifying session roars to life. We invite all of the MIR fans to be there and celebrate with us.”

Nitro Funny Car and Nitro Harley will bring with it the best racers in the world in those two classes as racers in two of the most popular categories in the country compete for eight spots on the ladder on Friday followed by a three grueling rounds of eliminations on Saturday to determine the champion.

The Nitro Funny Car class will be led by series points leader Jason Rupert in the “Bays & Rupert” ’69 Camaro following a dominating start to the season. The California native has won three out of four events to start the year and reset the IHRA elapsed time record on his way to his commanding start. He will be joined in Maryland by “Mr. Explosive” Mark Sanders, the legendary “Jungle Jim” Camaro driven by John Smith, Mike McIntire Jr. and the “McAttack” team, former IHRA Top Fuel world champion Bruce Litton in “U.S. Male” and more as a dozen nitro-powered Funny Cars do battle at a track known for its very fast surface.

Rupert’s biggest threat, Peter Gallen in the “Poverty Stricken” nostalgia machine, will also return to action in Maryland. Two of the fastest Funny Cars in the world representing both coasts, Gallen and Rupert produced an epic battle at IHRA’s last stop and the two will once again fight for the right to be called IHRA’s top dog in Maryland.

Mountain Motor Pro Stock – a longtime staple of the IHRA – will also to IHRA competition at the President’s Cup Nationals as many of the baddest racecars in the country compete for a spot on an eight-car ladder and a shot at a victory at one of America’s premier racing destinations. The Black Diamond Motorsports team, led by John DeFlorian and Kevin Bealko, will continue the fight against the recently announced three-car team of Goforth Racing with points leader Cary Goforth, father Dean Goforth and Todd Hoerner, along with two-time IHRA Pro Stock champion Pete Berner and more.

Nitro Altered and Jet Dragster will round out the competitive action as two classes unique to the IHRA do battle with the fastest of the fast walking away with the Ironman. Easily the most exciting addition to the IHRA in some time, the all-female Larsen Motorsports Jet Dragster team have been the talk of the series so far with close, side-by-side jet-powered racing and a unique pit area that welcomes fans to explore the world of jet racing.

The professional action will be coupled with two days of sportsman racing on the Summit Racing Equipment Pro-Am Tour as the best racers in Division 1 do battle for valuable points on their way to clinching a spot in the year-end Summit Tournament of Champions.

In addition to the on-track action, the 2014 IHRA Nitro Jam President’s Cup Nationals will feature an all-new and fully interactive Fan Fest pit experience. Fans can tour the pits, meet the drivers and take part in a number of fun family activities including the Larsen Motorsports Jet Technology Center and the Hollywood Cars of the Stars featuring real cars from famous movies and television series.

One of the longest running races in IHRA history, the President’s Cup Nationals’ inaugural race came in 1992 at Royce Miller’s Maryland International Raceway. The race was run annually for the next two decades with some of the most famous names in drag racing lore having made a pass at the President’s Cup event.