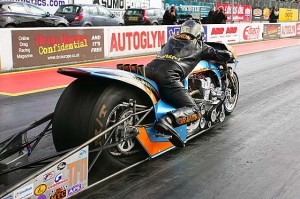 Following the Gulf Oil – Grand Prix Originals – Top Fuel Bike’s dream debut at the opening round of the European Championship in Hungary all eyes turned to the `Main Event’, the second round at Santa Pod in the UK. The oldest established track in Europe is well known for its unique atmosphere and good racing surface, something lacking at the Hungarian facility.

With a strong showing of local riders in the Top Fuel Bike class the team expected to be pushed hard and in turn start turning the type of performance the Puma constructed machine is capable of.

However, it was not to be as high winds and an exceptionally cold track surface for both the qualifying days meant the hardworking crew had to tune the bike to what would end as even more conservative clutch and fuel settings than at the previous race. 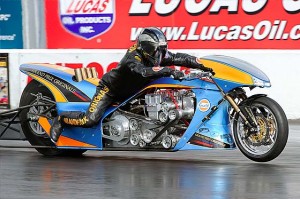 Despite the lack of track time and the conditions the team managed to secure the number two qualifying position behind multiple UK Champion and home track specialist Steve Woolatt but ahead of reigning European Champion Petri Paljakka of Finland.

With the seeding of the qualifying table it meant the King and Woolatt could only meet in what would be a widely anticipated `local’ final but it was not to be as finals day saw persistent rain all day and the event was called mid afternoon.

However, the team had extended their Championship lead and look forward to the third round, at the world class new facility at Tierp in Sweden. 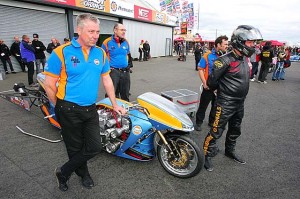 APE  – The world’s most innovative manufacturer of aftermarket parts for race bikes
COMETIC GASKETS – The Premier Manufacturer of racing gaskets
BELL HELMETS – The ultimate iconic helmet brand
GATES – The world’s most trusted name in drive belts, hoses and hydraulics
GOEDHALS – The name in precision specialist gear cutting
GOODRIDGE – The most innovative and the best in fluid transfer systems
GRAND PRIX ORIGINALS – The brand for drive and lifestyle, past and present
GULF OIL INTERNATIONAL – The world’s most iconic brand in automotive fuels and lubricants
HYPERPRO – The leading producer of progressive suspension products for motor bikes 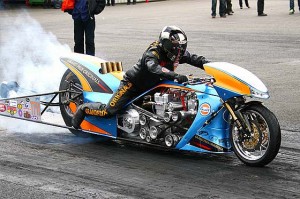 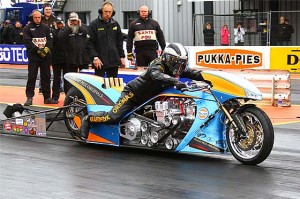 Savoie Qualified Third for the SuperNationals