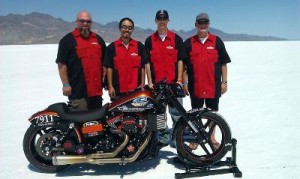 Koiso’s 2006 Harley FXD-I is powered by a JIMS 131 cubic inch, twin-cam engine modified by T-Man Performance. The motorcycle is ridden on the street and Koiso had boldly proclaimed the machine to be the world’s quickest street legal Harley-Davidson prior to setting the records at Bonneville.  Koiso backed up his claim.

“This year’s preparation was tough but it was all worth it. I was so glad to be back on the salt to redeem myself,” said Koiso, who suffered a crash during the 2010 campaign.

Teasley to the Semis at first ADRL Race