Henson Qualifies for NHRA US Nationals 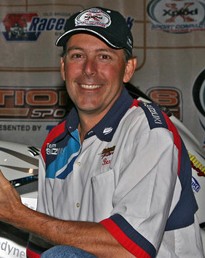 And Henson didn’t make the field for the first time at just any event, he accomplished the feat at the world’s most famous and prestigious drag race, The NHRA US Nationals from Indianapolis, Ind. Henson finished the fifth and final round of qualifying in the No. 13 spot, with an NHRA career best run of 7.06.

Henson’s season-high performance comes after he decided to take a few races off to continue to test and develop his equipment.

“We just had to step back and stop making changes,” Henson said.  “When I first started I wanted to try everything so I would know what works the best, but we were getting to the point where we just needed to decide on the best combination and stick to it.”

“Throughout the first half of the year I tried two different chassis, three different motors, carburetors, fuel injection, and several different ignitions.”

Over the first half of the year Henson ran power plants built by Rick Ward, Paul Gast and Vance and Hines.

“We have found what we intend to use and there is no doubt in my mind that the bike has the power to run as quick as we need it to go,” said the former road racing standout.  “It’s just a matter of us being able to put the right clutch tune-up in it.”

Henson, a 20-year-plus  motorcycle racing veteran, encountered similar hardship when he made the transition from road racing to street bike drag racing in 2002.  However in less than five years Henson was able to garner two national titles and set numerous records, running with class legends like Rickey Gadson and Kent Stotz. Will the trend of success continue for Henson in Pro Stock the way it did in Shootout?

Henson is doing everything in his power to make sure the answer to that question is “yes.”

“We knew what we were getting into.  I knew this class was a big money game and that it would take a lot of time and effort to be competitive,” Henson said.  “We are ready to come back strong in 2008.  We will be at all 17 races and we have several meetings with potential sponsors coming up soon.”