Fresh Winners and Records at The Rock

Mickey Thompson Performance Tires MiRock Superbike Series headlines have mostly screamed “Jeremy Teasley” so far in 2010, as the Ohio teenager has dominated the season at the nation’s biggest all motorcycle drag racing events. And it didn’t look like it would be any different in Orient Express Pro Street at the end of Saturday’s qualifying sessions for the Schnitz Summer Sizzler at North Carolina’s Rockingham Dragway.

Teasley laid down a perfect final round lap to set a new street legal nitrous record of 7.19 on the lime green Adams Performance/RS Motorsports Kawasaki ZX14 and claim the number 1 spot. But the team swapped motors overnight and a clutch malfunction pulled Teasley through the staging beams in round 2, giving Brandon Tyree an uncontested win on Big Bo Miller’s nitrous Hayabusa. 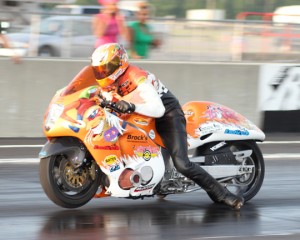 Tyree carried the opportunity all the way to the final against longtime independent racer Ken Edwards and his “No Joke” turbo ‘Busa. If not a thing of beauty, the nighttime final was at least exciting. Tyree spun at the hit, while Edwards nailed a James Bond .007 light at the tree before an alternate set of spins and wild wheelies that nearly threw Ken off the bike. The would-be rodeo rider stayed with it and crossed the line for his first Pro Street win in dramatic fashion.

Teasley’s huge Real Street points lead caused the Adams Performance/RS Motorsports team to neglect the class at this event and focus on setting records and gaining points in Pro Street, and Jeremy lost to team boss Coby Adams in round 1 of Real Street on Sunday when Coby drove around Jeremy at the big end. 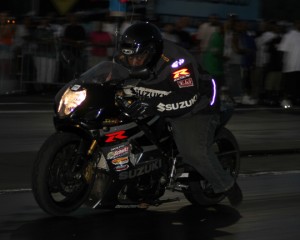 “Eddie Who?” Chapman broke the three-way tie for first in the House of Speed Crazy 8’s points battle by beating Ray Morris in the final. “Fearsome” Andy Baumbach won the Motorcycle Tire Outlet 5.60 final with a better light over Jim Shifflett, who also runner-upped to Shayne Proctor in FBR Shop Quick 32.

Find out more about the MiRock Superbike series at http://www.mirockracing.com

McBride Mingles in the Mainstream