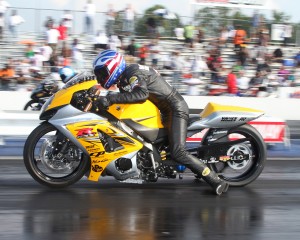 Rider Chip Ellis and tuner Blake Ritter weren’t intimidated by Jeremy Teasley’s HTP Performance Real Street win streak. The bounty that the Mickey Thompson Performance Tires MiRock Superbike Series levied on Teasley’s head had swelled and Ellis and Ritter planned on taking it back to Indiana with them.

But before the pair could take on Teasley for the win at Maryland International Raceway’s Fast by Gast WPGC Bike Fest—now indisputably the nation’s biggest all-motorcycle drag race—Teasley had some unfinished business to attend to.  He still had to win the rain delayed June final over Eddie Murphy. That he did on Saturday, doubling the bounty for anyone that could beat him and his Adams Performance/RS Motorsports Kawasaki ZX14 on Sunday.

No combination rose to that challenge better than multi-time AMA Prostar national champ and NHRA national event winner Ellis, his fellow Vance & Hines employee Ritter, and their Suzuki GSX-R1000. Ellis qualified number 1 and made his way to a semifinal made up entirely of riders who’d ridden for Teasley’s team boss Coby Adams at some point in their careers—Ellis himself, Ryan Schnitz, superstar Rickey Gadson, and current pilot Teasley. Ellis advanced in style, nailing a record 7.83 to beat Schnitz. Teasley beat Gadson, then took the tree against Ellis in the final. But setting the record was no fluke for Ellis, and Ritter had the bike firmly in the 7.80’s at this point. Teasley, running a whole new nitrous system installed by owner/tuner Roger Starrette, was stuck in the .90’s and event promoter Jason Miller handed the cash bounty over to Ellis in the MIR winners circle. 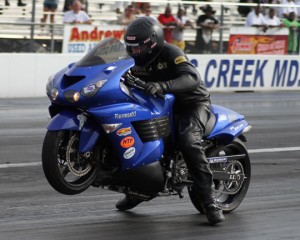 Adams is final round tested after many matches with his rider Teasley, but couldn’t get his own ZX14 to hook up on Saturday and was stuck in the B race on Sunday. He opened the day with an 8.0 but fluctuated as the day wore on. His worst light and ET of the day came in the final against fellow builder/tuner heavyweight Del Flores. But Del and his ‘Busa were hovering around 8.40, and Adams had enough to take the B race.

Although Teasley saw his Real Street streak broken, two Orient Express Pro Street wins on the weekend helped ease the pain. After leaving the tree within .001 of each other, Teasley and his nitrous huffing Kawasaki ZX14 ran 7.31 to pull ahead of number 2 plateholder Rodney Williford for the rain delayed June race win. Rodney’s turbocharged Suzuki Hayabusa was on a top end charge but ran out of racetrack.

Sunday’s race saw plenty of Pro Street upsets, with number 1 qualifier Bud Yoder breaking in the water box before his round 2 match with Sean “Skinny” Walsh. Sean carried that break all the way to his first Pro Street final against Teasley, and stepped up by taking the tree and running his quickest lap of the weekend. But that wasn’t enough to keep Teasley from his second Pro Street win of the event.

Steve Smithers drove all the way from Kansas and was determined not to go home empty handed. He beat Ehren Litten in the Pro Street B final after a full, four round raceday.

Pro Comp eighth mile racing for nitrous Pro Mods, turbo Funnybikes and Outlaw Pro Street bikes made its MiRock debut, and Maryland native Ronnie Procopio took all the spoils. Procopio qualified number 1 on his nitrous Pro Mod Suzuki and met up with Canadian Terry Schweigert on a similar combination in the final. Schweigert failed to make the long trip pay off, cutting a poor light, backsliding slightly on ET, and handing Procopio the homecoming win. 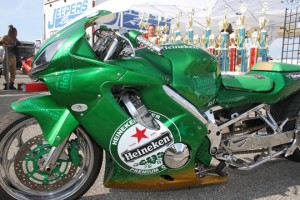 obert “Crossroads” Johnson worked his way through a 52 bike House of Speed Crazy 8’s field to meet Dr. Rick Bunting in the final. Bunting ran .009 off the index, but gave up too much to Johnson’s .012 light at the tree and Johnson took the win. 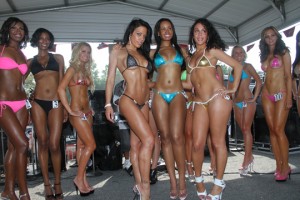 Derek Christensen and Brandon Bachmeier bested 133 riders to reach the final in Saturday’s Schnitz Racing Street ET race, and Christensen bested Bachmeier in the final. Dale Hamilton and Glenn Gass fought their way through an even bigger field on Sunday, with Hamilton taking the win. 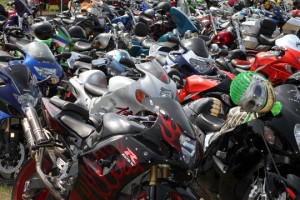 In all, 7000 watched the Maryland action, which along with the 450+ race entries each day included 47 stunt and show bikes, 13 bikini contestants, live music, and a large vendor display, all at Maryland International Raceway’s fabulous facility.