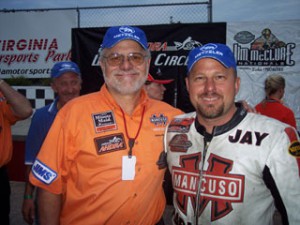 The true mark of excellence and consistency for any drag racer is to win two classes at the same event. Typically, although rare, the feat is accomplished by sportsman racers competing in index classes and ET. However it’s even more so out-of-the-ordinary for a racer to a score a double in the pro ranks, especially in two nitro categories. 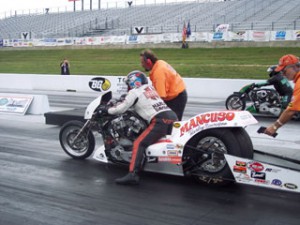 Jay “The Bulldog” Turner, rider of the Mancuso Harley Davidson-backed Pro Fuel and Top Fuel entries, displayed remarkable consistency and took the back-to-back wins at the AHDRA S&S Jim McClure Nationals from Virginia Motorsports Park. Turner defeated Steve Simmons in the final of Pro Fuel with a blast of 6.87 to Simmons’ 8.80, and moments later narrowly defeated former champ and world record holder Doug Vancil with a 6.413 to a 6.417. After Turner won in Pro Fuel, the entire event came to a halt, as Turner was escorted back up to the starting line via his team’s scooter. The consecutive laps didn’t seem to affect Turner’s concentration at all based on his .035 reaction time against Vancil. “Running back-to-back can’t hurt you,” Turner said. “I like racing as many times as I can. I wouldn’t mind if Top Fuel was a 32 bike field.” I’m sure the fans wouldn’t either. 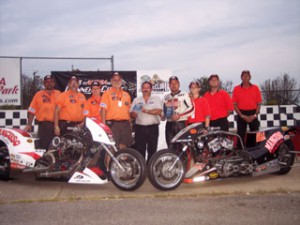 On the day Turner was a perfect 7-0 in round competition. “We were very consistent. We ran four 6.40s. Four .40s will beat one .20,” Turner said in reference to No. 1 qualifier Tak Shigematsu’s run of 6.24 – the talk of the event. “We have a great team. Johnny (Mancuso) and the rest of the gang did a great job tuning and I just tried to ride the thing the best I could.” Even more impressive is the fact that it’s not the first time Turner has accomplished the feat. He scored his first nitro double less than a year ago in Rockingham, NC. A large part of Turner’s success may lie in the experience and knowledge of Mancuso. “The track stayed good all day and we just tried to do the best we could interpreting the data we had,” Mancuso said. “We just tweaked away at it and never let anyone else’s performance affect us. We ran our race.” The event was extra special for Mancuso as he was not in attendance for Turner’s first double due to the funeral of his stepfather. “That was one race I was sorry I missed,” Mancuso said. “It means a lot to do it again.” With the victory Turner passed Vancil to move into the No. 2 spot in the point series, behind leader Mike Romine.

Turner seemed to have went unnoticed for much of the day due to the hype surrounding Shigematsu’s bid to set a new AHDRA record. Shigematsu continued to smoke the tire and failed to run the needed 6.307 to back up the 6.245. “No more smoke tire,” Shigematsu said during an interview. After being upset in round No. 2 Shigematsu entered the exhibition class Nitro Harley Outlaw, but still was unable to make it down the racetrack cleanly. In all Shigematsu ran the record blast during his first run on Saturday, then failed to make a full pass for the rest of the event. “He got out of the groove and it filled the cylinders up with fuel,” reported tuner Don Johnson. “We left the same tune-up in it. During some of the runs we even backed it down. It’s frustrating. We certainly had the power to get the record.” 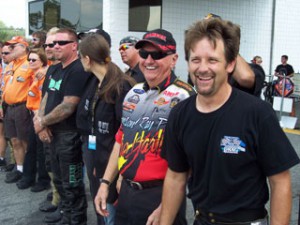 The opening ceremonies proved to be worth the price of admission. All of the Top Fuel teams lined up at the base of the timing tower and the No. 1 qualifiers and all of the AHDRA staff formed two straight lines on the starting line. In honor of the late Jim McClure, a local motorcycle club rode one by one and parked on the return road. After driver introductions and the invocation, the Ft. Lee color guard presented the American flag and a moment of silence was had for McClure and all of the United States military. 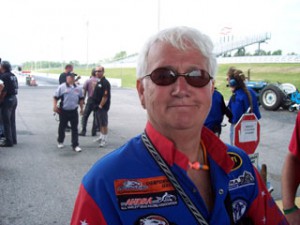 After the National Anthem McClure’s widow Phyllis McClure was summoned to the head of the track to give the first pair of riders the call to “Light em’ up.” “Jim would have been very proud of this,” McClure said. “He lived for racing.”