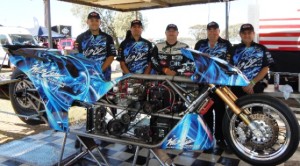 Matheson almost one second quicker than his nearest competitor stamped his authority on the event from the first Qualifying pass, setting a blistering 6.37 at almost 200 mph.

Matheson said “the Nitro Voodoo Team ran quicker every pass, as we adapted the power to the Track to get the result.  We ran as fast as 222 mph and two 6.1 second passes, our worst smoking the tyre, with a peddle resulting in a 6.373 pass at just under 200 mph”.

Matheson was clearly chasing numbers at the meeting, as his massive points lead in the Championship chase allowed the Team to push the Track limits to lower their ET. The Nitro Voodoo Team dominates the Championship lead with 517.5 points, some 244 points ahead No.2 Chris Porter from Bad Bones Racing.

Matheson said “we have focused on securing points all season and taking each Round as a Championship in itself.  We attack the Qualifying Rounds to ensure we are well positioned in the Eliminations come race day, then go all out to win the meeting”.

Matheson’s strategy clearly works, as the Nitro Voodoo Team has won all 4 Rounds this year, with the last Round at Willowbank to come in early June.

Matheson has taken out Lowest ET and Top MPH on all bar one race meeting and has won all Rounds this season, underlining his Team’s ability to consistently be the quickest Top Fuel Motorcycle in Australia and the Southern Hemisphere.

Matheson, a relative new recruit to the scene has won the last three Championships from his Rookie beginning.  He holds Track Records at Adelaide International Raceway, Sydney Dragway and Willowbank Raceway and is the National Record holder at 6.058.

Since the inception of the Top Fuel Motorcycle Group 1 Series, no person has dominated the Series to the level of Matheson and his Nitro Voodoo Team.

Matheson’s winning formula has produced a staggering win rate of over 90%, with only 2 Round Final losses in his career, both smoking the rear tyre and over powering the track, chasing the win.

Matheson said “we aren’t done yet, we have a clear goal of running the first five second pass on a Fuel Bike in Australia and creating history in the sport.  The upcoming Winternationals in June is at our home track and the scene of many great results in the past.  We will be pushing the limits to try for the magic 5 second pass”.

Matheson went on to say “we have run our best numbers at Willowbank and if conditions are there, we will go quick.  The Bike is running well.  Roger Bloor, my Crew Chief, Bruce McGonnell, Graeme Turner and new comer Troy Thompson have got the servicing and tuning down to a fine art”.

Matheson said he cannot praise these guys enough, they are undeniably the best worldwide and the consistency in winning three Championships in a row underlines their ability to win.

Bring on the Winternationals!!

Winternationals to be held 8-11 June, over the Queen’s Birthday long weekend.