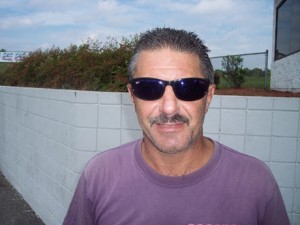 Sanction owners Jane and Marty Vandenheuvel called Brancaccio after the season’s points were tallied, Brancaccio was at the top of the national competitors in Top Fuel, the unlimited displacement nitromethane burning class.

Brancaccio and Johnson had been tuning the Top Fuel motorcycle dragster for four weekends, testing new gear combinations, clutch set-ups and new timing techniques. It was with Johnson that Brancaccio turned one of the world’s quickest Top Fuel times with a 6.26 ET at 226.47 miles per hour in the quarter mile in a test session at Atco, NJ. Although a test session time is not good for the world record, it does show the power in the Johnson built and tuned hot-rod Harley and certainly proves the riding ability of Brancaccio.

The next event for these New Jersey horsepower-creating men will be at the AHDRA Jim McClure National Finals in Rockingham, NC, Oct. 8-11. However, this time they’ll be on opposite side of the timing lights as Brancaccio will be riding his own bike and Takeshi Shigematsu will make the long flight from Japan to ride for Johnson.

McBride to be Featured on TLC’s American Chopper