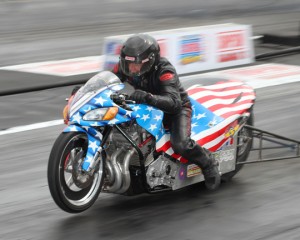 Terry “Milkman” Schweigert and the DTM Performance Pro Mod Xtreme team head to the ADRL’s Battle of the Belts in Texas looking for the secret tweak to propel their Suzuki past series leader Ashley Owens. Solidly best-of-the-rest, Schweigert ran his personal best at the rain shortened Dragstock VII in Rockingham and runner-upped for the fourth time this year at the Ohio Drags IV at Summit Motorsports Park.

A mid-season rules change allowed the team to run a second stage of nitrous oxide for the first time ever at Rockingham, but they ran Q1 there on one stage only for a 4.174, .002 behind surprise number 2 qualifier Kim Morrell. “We didn’t want to screw up,” said DTM builder/tuner Dan “The Man” Wagner, turning on the second stage between rounds. “We ran the first stage and ran what we were supposed to, now this should make us go threes.”

Threes are on the horizon, but not that next round. “Oh no,” said Wagner, adding fuel to richen up the mix and make it safe for Q2. “But the potential is all here now, as long as it works and we don’t break anything. But that’s part of it, you’ve got to figure it out and we broke two motors testing. I can get it right by the Battle of the Belts, get this thing right on the fine line of going fast and breaking stuff.”

But the Battle of the Belts isn’t until the last race of the year, and Rockingham’s Q2 is up now! The team improves slightly to pass Morrell with a 4.141, but Owens ran the quickest lap in history with a 4.02 and an astounding 1.00 60 foot time.

The third round of qualifying was under the Rockingham lights in front of packed grandstands, but what they saw from Schweigert was a hairy ride towards the centerline. “That was my fault,” said Wagner. “We should have run an .09 in those conditions, but that Ashley guy got a hold of me with that 1.00 60 foot. I should have just left our tune-up alone. 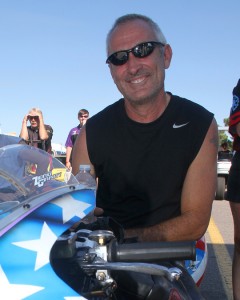 “Terry’s doing a helluva job riding this bike. I put way too much in it at the starting line, lined him up in a bald spot, I did everything wrong I could’ve done. He drove the bike, didn’t hurt the motor, got out of it in high gear, and didn’t cross the centerline. For a rookie rider, a guy who’s never ridden anything of this caliber, it’s just amazing how well he’s picked it up. From day 1 he’s just put it together.”

“That pass was a little wild run,” agreed Schweigert, a third generation Canadian diary farmer. “The tire spun and it pulled hard to the center.”

The wild pass may not have been entirely the fault of Wagner’s overzealous tuning, as cracks were discovered in the wheelie bar welds before the bike was taken to staging for Saturday morning’s final qualifier. Repairs were made and the bars reinstalled in the lanes.

That Saturday pass marked a turnaround for the team, as Schweigert ran a personal best 4.103 in the final qualifying session, firmly establishing theirs as the number 2 bike. “Ow!” laughed Wagner, chaffing at being second best. But what’s it going to take to get to number 1? “We can break Ashley’s legs, or somehow have the sheriff cut him off at the pass on the way to the track, or we’re going to have to pick up about a tenth. I think we have half that left in this new second stage, but a whole tenth—I’m going to have to work on that 60 foot. Our best is a 1.020, and we’ve been really hoping for a 1.01 this weekend.”

Until recently, Pro Mod bikes didn’t react quick enough to lay down those kinds of numbers. When Paul Gast adapted his Pro Stock TL1000 to Pro Mod, his initial advantage was his Pro Stock 60 foot times. That advantage has been erased, so where did it all go? “Testing,” said Wagner. “It used to be that the Pro Stock guys always tested more than Pro Mod guys, but now since the ADRL, everybody’s testing.”

“We ran a better 60 foot that pass than we’ve been running this weekend,” said Schweigert. “It was a 1.039, but we’ve run a 1.024. We also could have gone straighter, and that would have been faster. We’ll just bring the second stage of nitrous in earlier. It’s currently coming in halfway through the run. I feel it just when I’m hitting third with the front wheel off the ground and it just seems to carry on, not like a big push or anything.”

“There’s still very little difference between these motors and the one I first built for Barry Greene a long time ago,” said Wagner. “But Ashley’s got some of the newest, latest stuff and we might have to lean towards that. Some extravagant heads and valve combinations, larger valves, larger cams, the parts are made to rev higher. But they wear out quicker, more Pro Stock-like. We can run our valve springs for over a year, where I can only imagine his springs are wearing out more quickly. Ashley’s advantage is also the 25 years he’s put into Pro Mod against some of the top guys in the class. He’s beat Billy Vose, he’s been tuned by Russ Nyberg of C&W Cycleworks, this guy’s been all over Pro Mod for years and years and always at the top. He was the first one in the teens, he’s the first one in the .0’s.”

Was Wagner surprised when Owens sat out the final qualifying round in Rockingham? “He’s done that all year, playing it smart, saving equipment.”

Once again, on the 4.10 run, Wagner was impressed with Schweigert’s riding. “He was drifting, he knew he was heading towards the centerline, but he knew he was on a good run so he wasn’t going to let off. You look at the computer and he’s in it for four and a half seconds. Not only did he make the finishline, he just kept going.”

But the Rockingham event didn’t keep going, as rain ended the event after qualifying and postponed eliminations to Norwalk. “It’s disappointing, but I’m not that disappointed,” Schweigert said about the rainout. “We get time now to go out and test a little bit more for the next race.”

But the team found the other side of that fine edge in Norwalk. “We blew up all our motors and completely destroyed the motor in the final against Ashley,” said Schweigert. “We are just having a bit of hard luck and pushing things to the limit trying our second stage. But the field has been set now for the Battle of the Belts. The top eight have a chance to be champ and we are in second place.”

“Three rounds and you’re the champ,” added Wagner. “If we have to use three motors to win three rounds, I’ll do it. We’ve made it that far.”

“And that first three second pass,” said Schweigert, his eyes glistening at the possibility. “The first guy to do that, that’s gonna be a big deal.”