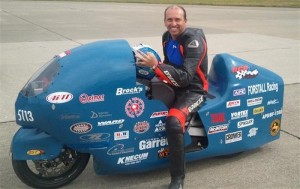 Recently land speed racer Bill Warner had an unfortunate crash at about 110 mph at the Texas Mile.  Warner issued the following statement on his condition –

“First of all, I want to thank everyone for their faithful prayers and wishes – they truly worked.  There has been such an outpouring of kindness and consideration for me and my situation.  I’m am overwhelmed with the time and energy and love that everyone has put toward my recovery.  I can’t count the number of emails, gifts, texts, phone calls, and personal visits that have been delivered to me.  There have also been many things that required my attention during the last several weeks, and I was unable to attend to them.  Once again, my friends and the racing community has graciously stepped up and picked the slack.  I will always be grateful to each and every one of you.
Now, I also want to acknowledge everyone’s consideration in allowing me to focus on the healing process and not asking me to answer all the questions that you have about the crash on October 21st.  So, now I’d like  to just offer up a little bit of my perspective on what occurred:
The run started out just as planned.  However, in 6th Gear, at approximately 270 MPH and at about the ¾ Mile marker, the bike did a dramatic wheelie.  At that time I shut the bike down to bring it into control, passing through the speed traps at 238 MPH.  Shut down was normal and felt under control.  I was aggressively braking and scrubbing off speed as thought appropriate and approaching the newly paved/coated “last 1000 feet of paved shutdown” I had reduced my speed to approximately 100 MPH.  At this point all appeared good and I was headed for a completed run.  However, when transitioning from the concrete paved track to the newly coated/paved section of the shut down area, with lots of braking still being applied, the bike abruptly washed out, slamming me and the bike to the pavement on the left side.  I was briefly knocked unconscious and unaware of what transpired during the next several seconds as the bike and I slid to a final stopping point.  As I began to return to consciousness I found myself surrounded by the Texas Mile Emergency Team.   After a few minutes of careful assessment my condition by the Emergency Staff, I was loaded into the emergency helicopter and transported to the Spohn Memorial Hospital Trauma Center.  Here’s a quick summary of my injuries: road rash on left shoulder, broken scapula, four broken ribs, punctured left lung, contusion on the liver, broken bones on left hand (forefinger and thumb), severe abrasions with significant tissue damage and loss to the left/inside knee area, severe tissue damage and tissue loss to the top of the left foot, to include the severing and loss of the big toe tendon.  As any of who have experienced a significant crash, the injuries are only part one, then comes the break fix/treatment work.   Nineteen days of significant pain medicine therapy made it a bit difficult to offer very much coherent communications to friends and supporters.  But that is now over, and I look forward to seeing and communicating with all of you.  The chest tube has been removed from my right lung, the skin graft taken from the top of my left thigh and placed on the damaged left knee and foot, the big toe tendon has been fused, the broken bones have been pinned in my left hand are mending the fractures, and I now focused on the next phase of my recovery.
Once again, my heartfelt thanks go out to each and every one of you who have been there for me in my time of need.  For that I will be eternally grateful.”

First, he wheelies at 266 mph and has to get out of it. While slowing down, the front end washes out at approximately 110 mph when the tire hits the newly sealed blacktop surface.

Brock's Performance Hits the Dyno With the 2012 Kawasaki ZX14R

King Ends Season on a High