Brock’s Performance Hits the Dyno With the 2012 Kawasaki ZX14R 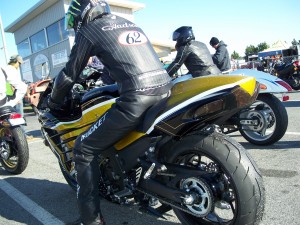 Brock Davidson of Brock’s Performance has been making parts for the new 2012 Kawasaki ZX14R, but until the November Manufacturer’s Cup event he’d never actually laid his hands on one. There he got to put Robert Fisher’s Roaring Toyz 2012 ZX14R through the paces on Hitman’s Dyno, while Rickey Gadson and Jeremy Teasley tore up South Georgia Motorsports Park’s quarter mile with the beautiful bike. Watch it all at http://www.youtube.com/watch?v=_dj41sIAiWk, courtesy of http://www.brocksperformance.com/