Back on Team Savoie, L.E. Tonglet Banking on Another Strong Charlotte 4-Wide Finish

Back with the team he enjoyed so much success with during the 2017 NHRA Mello Yello Drag Racing Series season, LE Tonglet is looking forward to putting on another show at this weekend’s NGK Spark Plugs NHRA Four-Wide Nationals at zMAX Dragway.

The former Pro Stock Motorcycle world champion announced earlier this week he was returning to the White Alligator Racing team owned by 2016 world champ Jerry Savoie, hoping to recreate the magic and success that led to six wins a year ago. The first of those started in Charlotte, where Tonglet thrived in the thrilling four-wide racing set-up on his KPK/Nitrofish Suzuki. He has long enjoyed the unique and exciting race, and expects continued success this weekend.

“I usually do pretty good at the four-wide event and last year was the first time we were able to win it, so I feel very confident that we’re going to go out there and win it again,” said Tonglet, who finished third in points in 2017. “I try not to think of it as any different than any other race. We just go out there and do the same thing at every track, and that’s win. Charlotte is one of those where I did it, so we just want to try to go out there and repeat like we did last year.”

Steve Torrence (Top Fuel), Ron Capps (Funny Car), Chris McGaha (Pro Stock), and Tonglet (Pro Stock Motorcycle) were last year’s winners of a race that will be televised on FOX Sports 1, including a broadcast of the finals on Sunday, April 29 at 6:00 p.m. (ET). The event is one of the biggest spectacles in drag racing, and marks the second of 16 events in Pro Stock Motorcycle. 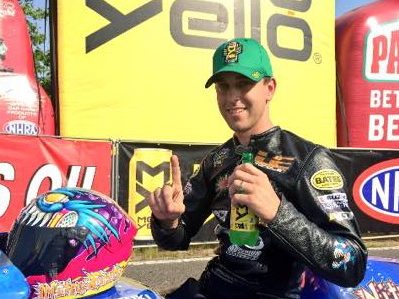 Tonglet heads to Charlotte reinvigorated after joining back up with Savoie. That tandem won a combined eight races in 2017, with Tonglet looking to regroup after qualifying 15th and losing in the first round to defending world champ Eddie Krawiec, who went on to win the season-opening race in the class at Gainesville. Back with the White Alligator Racing team, Tonglet feels that success will happen, as the bike will be set-up exactly like it was a season ago when he enjoyed plenty of success.

“It’s a huge relief having Tim (Kulungian) as crew chief and Jerry as a teammate,” Tonglet said. “We all push each other to be better riders. Tim sets up the bike, and it’s always fast. We don’t have anything to worry about besides riding, and it’s going to be a lot of fun. My dad will be there like last year when he was lining me up, and (brother) G.T. will be coming to a lot of the races.”

Tonglet found the winning formula at zMAX Dragway a season ago, performing well on the starting line en route to the victory. He’ll face off against 20 other talented riders this time, including Andrew Hines, Hector Arana Jr., Scotty Pollacheck and three-time world champion Angelle Sampey, but the 2010 world champion is confident in what he will be able to accomplish at the fan-favorite race.

“The biggest thing is staying level-headed because on the starting line, it can get pretty hectic,” said Tonglet, who has 16 career victories. “People can get confused very easily. We have to thank Scott Pollacheck last year for helping give us that win because we threw the two Harley guys (Hines & Krawiec) off. You’ve just got to keep your head on straight.”