Australia’s quickest man on two wheels will be attempting to set another Australian record, however, this time on his Nitro Harley V-Twin at the upcoming Winternationals.  Matheson holds the outright Australian Top Fuel Motorcycle Record on his Four Cylinder Nitro Voodoo machine at 6.04 ET at over 241 MPH set in 2013.  Matheson said the current Twin record in Australia is 6.37 seconds, held by Mark Drew, set earlier this year at the Perth Motorplex. 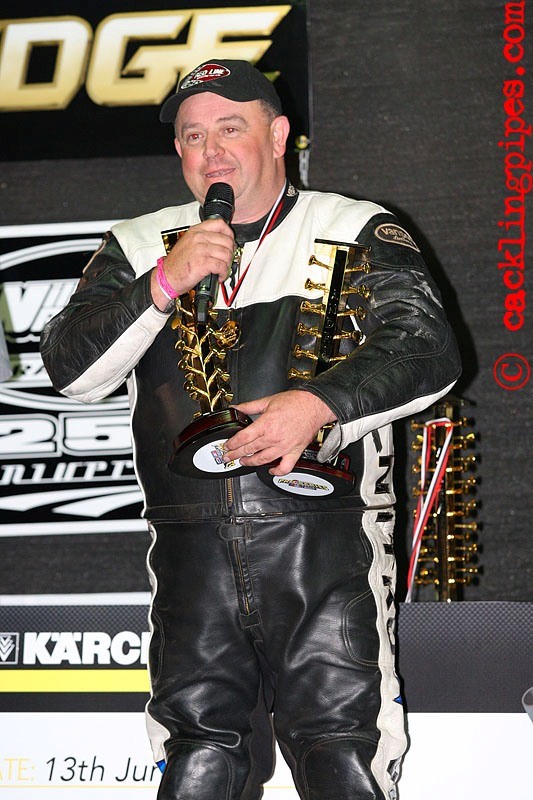 This year Matheson has been competing in the ANDRA Pro-Series Championships on his Nitro Harley V-Twin, while he updates his Record holding Multi Cylinder Nitro Voodoo machine for the 2015/2016 season.

To date we have had a checkered season, winning only one of the three rounds thus far, with luck not on our side.  With a rain out at Sydney in Round 4, we only have one last role of the dice at the final Round at the Winternationals in a couple of weeks.

Matheson said his Nitro Harley certainly has the pedigree, being a former multiple American National Championship winning bike and former World Record holder at 6.22 ET at over 230 MPH.

Former owner Doug Vancil won numerous Championships, resetting records across America for a number of seasons.  After retiring the Bike a few years back, Matheson bought the machine to chase a Championship here in Australia.

The plan was to run the Twin after we achieve our goals on the Nitro Voodoo bike, however, I decided to bring it out while we freshen up the Voodoo machine, after being faced with the reality of parking the Voodoo machine for six months.

One of the key reasons I bought the Harley was that it ran the same inboard clutch and gearbox configuration as the Voodoo machine, which is really the key performance heart of the Motorcycle. It’s unique in Nitro Harley racing and I believe there is still more potential in the Bike through the clutch.

The Harley is a different beast, compared to the 4 Cylinder machine, as its low revving, big Cubs and slow off the line in comparison to the Voodoo machine.  However, once it gets out near half track it Rock ‘N Rolls, with big legs in the back half.

The bike is great to ride, it’s an animal when you fire it up, it bangs away as if there is a blacksmith in the motor hammering an anvil, it jumps all over the place with every fire of the cylinders, like two cannons going off continuously.

After sliding a titanium chest plate down the front of your leathers and lying over the 196 CUB Jack Hammer, you really know you’re in a vulnerable position.  The concussion out of these bikes is all attention grabbing, but, dare I say fun.  They really are something to see, let alone ride.

I would love to grab another win for the Team on the Harley, just to top off the season.

The Winternationals will be held at Willowbank Raceway over the long weekend Thursday 4th to Sunday 7th June 2015.