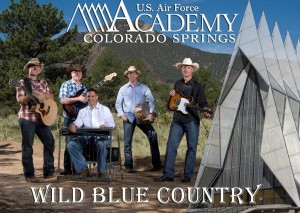 “Our drag racers and drag racing fans are some of the most patriotic folks in the country and we’re so honored to have the Air Force Academy Band join us at the track,” said WMDRA President Sandra Alberti. “God Bless America!”

Versatility, broad repertoire, and show-stopping professionalism enable Wild Blue Country to support every Air Force mission, from local and international community relations to recruiting and deployed troop support. A favorite in country music circles, Wild Blue Country has regularly been featured on the Grand Ole Opry and television shows like Nashville Now and Opry Back Stage. They have appeared with country recording artists such as Charlie Daniels, Hank Williams, Jr., and Reba McEntire just to name a few. Wild Blue Country has also appeared on “Good Morning America” as well as many other TV and radio shows around the country. As a favorite of military and civilian audiences alike, Wild Blue Country continues to captivate and entertain audiences through their worldwide appeal.

According to USAF Technical Sergeant Jeff S. Valentine, steel guitar, “We will be performing in and around the Sturgis area for Military Appreciation events throughout the Rally, but are really excited to be able to perform at Sturgis Dragway.” He added, “We can’t wait for the 200+ mph Nitro Harley’s to fire up as our ‘…home of the brave’ finale!”

Competition qualifying begins on Tuesday, August 5 at 3:00 p.m. with final eliminations on Wednesday. You won’t want to miss the Top Fuel Nitro bikes and 10 other classes of competition as racers take to the track to be crowned Sturgis Champion! Tickets are just $15/day or $25 for the two day event. For more information, please contact the WMDRA at (208) 850-5795 or info@westernmotodrags.com.