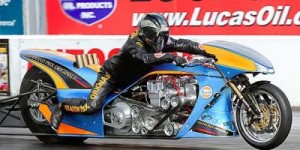 Some of the more usual questions we get from visitors to the King Racing pit area during a race event are “how long does the engine last?” or “do you have to rebuild it between every run like the Top Fuel cars?”

It would seem that it is a commonly held belief that supercharged 4 Cylinder Top Fuel Bike engines such as our Puma Engineering power plant are hard on parts, requiring frequent part replacement and as a result, are expensive to run.

Allow me to take you through our engine maintenance / repairs during the entire UEM Championship series in 2012. This year’s championship included 6 rounds in 4 different countries. Due to rain affected races not all events were completely finished but it still involved a total of 35 runs for us, most of which were in the low six second range.

Should one analyse a typical run you will notice the entire procedure from start up to reaching the end of the track lasts somewhere between 2 to 2.5 minutes.  The burn out lasts approx 2 seconds, however that is just rpm’s with very little throttle opening (load). Only a mere 6 seconds of the run is under full power, but the majority is just idling. 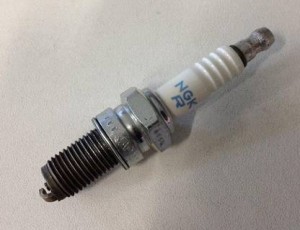 After each run we replace all eight NGK spark plugs (two spark plugs per cylinder). Not race plugs, just regular street bike / car plugs. Nitro driven engines tend to burn down the ground wire on a really good pass, but we did not experience this once during the entire season. However, we still always replaced them as a precaution.

Also, the engine oil is replaced after each round. There are a number of reasons for doing so.

First of all we look at the quality of drained oil. In particular we look for any metal particles (or other debris) as that may indicate that an internal mechanical part may be wearing or worse, about to fail.

Compared to street vehicles, Top Fuel engines generally operate with larger piston to wall clearances and the amount of injected fuel per cycle is approx 4 times as much as a petrol / gasoline driven engine (on full power at max rpm our engine swallows approx 12 gallons per minute).  This explains the increased drained fluid volume.

The total amount of oil / nitro mix which we drain, along with the Racepak datalogger info from the pan pressure sensor and the contents of the catch (breather) tank indicates the condition of our JE Pistons & rings. 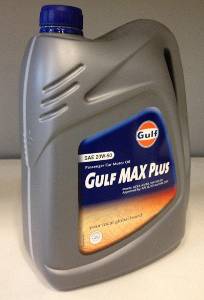 It may be interesting to know that our engine is not lubricated by special racing grade oil, but by commonly available Gulf 20W50 engine oil found in regular gas stations.

After each race we read the leak down figures and take our (2 intakes and one exhaust valve per cylinder) head off for closer inspection (whatever the leakdown figures are). 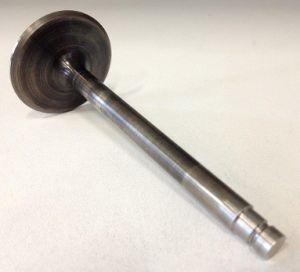 We take out the exhaust valves to give them a quick lap into the aluminium bronze skulls, but the Kibblewhite Nimonic valves hardly

needed any adjusting during the season.

Exhaust valves are probably the most vulnerable part in any fuel engine, however we never hurt one.

Below you can see an in depth look into (part of) our valve shim record. You can see how little the shim thickness varies from the start of the season to the end.

None of the valves had to be replaced and I think it is fair to say that the adjustments were minimal. 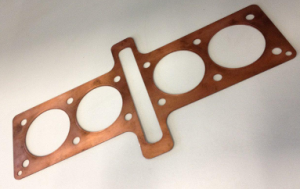 The Cometic copper head gasket is annealed after each race and is re-used.

This can be divided into two sections: 1) the parts that were damaged and 2) the parts which we replaced as a precaution. 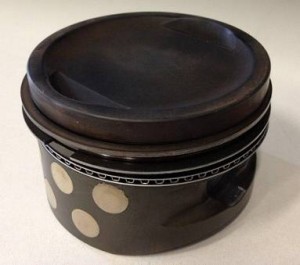 We had to replace two of the JE Pistons after Hockenheim as the ring land had suffered minor damage causing the 2nd ring to `stick’.

We believe that this was caused by detonation, in turn caused by the need to ride the bike with very delicate throttle control due to the extremely poor track conditions.

Drag bikes are not designed to operate on part throttle and normally pistons can easily last the entire season or more. 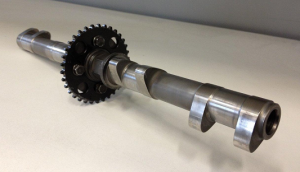 We replaced the timing chain twice. Though our Kent Cams and Kibblewhite valve springs are not really classified as `wild’, it is the extreme high combustion chamber pressures against which the exhaust valves have to open which puts most stress on the timing chain. 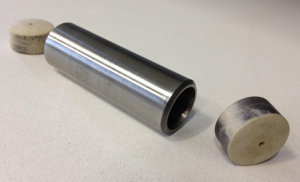 We replace the con rod shells halfway during the season and race schedule permitting may pull the entire engine apart and replace the main shells as well.

However it is not uncommon that the bottom end stays together all season long. The picture here shows both the main and big end shell bearings after a number of races this year. They are almost as good as new, and if they were not so cheap to replace they could be put back into the engine for many more races. Their condition is testament to oil quality, oiling system efficiency and safe tune.

Other high stressed parts are the wrist pins. It is almost certainly unnecessary, but still we replace the APE  pins once during the entire season.

I hope that this clears up some of the commonly held misconceptions about running a blown 4 cylinder Top Fuel Bike engined machine. From our experience at the track, and that of another team with whom I have worked over many years they require lower maintenance and less replacement parts than the majority of the other `Professional’ classes.