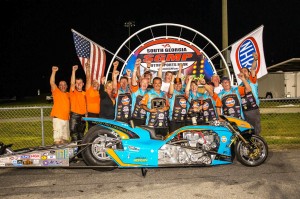 In what was a truly transatlantic team effort, the Gulf Oil Dragracing Top Fuel team in conjunction with John and Dea Morgan Racing and BlackCat Motorsports made history at the opening round of the 2014 Manufacturers Cup event at South Georgia Motorsports Park in Valdosta, Georgia, USA.

The Seven-time European Top Fuel Bike champions traveled to the event with one goal in mind, to secure the 8th and final spot in the exclusive MTC Engineering 5 Second Top Fuel Club after becoming the world’s sixth team to run a 5 second pass ever during European competition in 2013. It was quite a task with two other proven 5 second machines entered in the event in the hands of talented US riders Sam Wills and David Vantine and with the team shipping their operation almost half way across the world to compete in foreign and unknown conditions on an unfamiliar track.

After a check out half pass by team rider Ian King during Thursday’s test session the focus was on round one of qualifying on Friday evening. After Sam Wills and team owner Mike Dryden declared they were not in the race for the 5 Second Club spot, Pollard Nitrosports rider Vantine and King agreed to ride side-by-side to ensure both had an equal chance. However, with King drawn in what appeared to be the better performing left lane for round one Vantine elected to change lane but run behind him with the agreement that the order would be reversed in the next round should neither run a five. King ran a stout and easy 6.129 @ 221.16 mph, not quite enough to secure the desired spot in the club (to the huge disappointment of King) but enough to put him straight into the number two qualifying position behind multiple time USA Champion Larry McBride who ran a superb 5.799 @ 225.52 mph. Dave Vantine was hot on Ian’s heels with a 6.159 @ 219.08 with Sam Wills just a tad slower with a 6.311 @ 187.89 mph.

Q 2 on Saturday afternoon saw hot and sticky track conditions that proved difficult for all riders to improve on their numbers from the cooler conditions from the previous evening. Vantine went first and ran a 6.259 @ 229.24 mph and King ran a quicker 6.230 @ 232.83 mph in the unfavored right lane that remained high-speed of the race at the close of the event. Sam Wills meanwhile had some start line problems and left before the tree was activated. 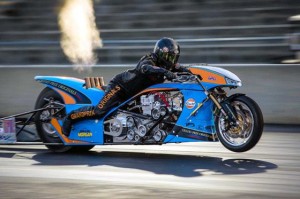 So, the Friday evening (and final qualifying) session was widely anticipated by all with their eyes on the 5 Second Club and with the cooler conditions it seemed that maybe the time was right for history to be made. However, the question of who was to run first between Vantine and King was up in the air but the timely appearance of race Pastor Don Dowling in the staging lanes was to be the answer when he tossed a coin and King won the right to run first. The run was superb, wheel in the air from the hit and a plume of clean header flames all the way past the finish line. Was this the run to secure the last spot in the club? The crowd and massed teams at the start line were bemused, no times nor speeds were showing on the scoreboards and they awaited information from track announcer Bill Hahn Jr.

At the other end of the track King waited patiently for Crew Chief Michael Beaumont to collect him with what he believed would be good news. However, when Beaumont appeared the look of thunder on his face said it all, the timing system had failed and no data had been recorded! The run was therefore void and now Vantine and Wills had the opportunity to benefit from King’s misfortune. But it was not to be for both US riders as they both suffered a fuel leak and shut down before running.

When King arrived back to his pit area the words of sorrow and sympathy from the race fans and team members at his misfortune and who had witnessed the `phantom’ run were overwhelming. A quick visit to the timing tower saw the timing crew confirming that indeed there was no time recorded and that they could not explain the malfunction. And to add `add insult to injury’ King’s position in the timing tower was perfect for him to watch veteran racer Chris Hand run a great 6.039 at 210.11 mph that bumped Kings recorded best into third position and giving him the most difficult route possible to reach the final and the cooler conditions that would be optimal for running a 5 second pass.

By the time the hardworking Gulf Oil Dragracing team turned the bike around for its next run the track had closed and so round one of eliminations would be their next outing on track. This gave the team the evening to consider race strategy and bike configuration changes to give them the best chance of success in eliminations. Morning of race day saw Crew Chief Michael Beaumont and Team Engineer Marius van der Zijden duly make the changes for an increase in power and commensurate clutch and ignition alterations that had been carefully decided.

Sunday dawned bright and warm, and King was to face Vantine in the first round. With the benefit of lane choice King opted left and his `oh so close’ 6.044 @ 224.96 mph was more than enough to dispatch Vantine’s game but tire spinning effort. 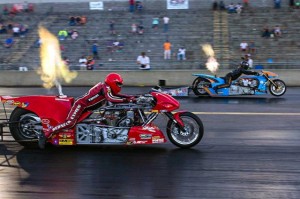 On the other side of the ladder Chris Hand overcame Sam Wills to leave King as the only rider left in competition who could take the last spot in the Club. However, there was a small matter of King’s semi final opponent, none other than multiple US Champion and number one qualifier Larry McBride who never takes prisoners on track. Despite the fact that their one and only former match-up fourteen years ago ended with King the winner, it was a huge hurdle for King to overcome with McBride running so strong in Q1. However, by virtue of previous round ET’s King once again had lane choice and put the US icon in the more difficult right lane. The lane choice proved to be decisive with King winning the semi-final with a 6.335 @ 191.48 mph against McBride’s tire blazing 8.448 @ 109.51 mph, the victor’s relatively low speed reflecting an early shut off in an attempt to evade contact with the wall at the top end.

So despite the trials of the previous evening the team had made the final and would run against London-born but US citizen Chris Hand on his Redneck Express machine. The RNE team had suffered some engine damage in their bye run semi final, but the Gulf team said they would wait as long as it took for their opponents to swap out engines.

Once again King had lane choice and opted for the left. Hand had a slight start line advantage but then King powered by the troubled Redneck Express to take a comfortable win. King knew it was a good pass, once again wheel in the air all the way, driven out the backdoor with all cylinders belching fire. But was it enough to achieve the ultimate aim of taking the last spot in the club. It took the arrival of

Hand and a congratulatory thumbs up to confirm that indeed it was. Not only that but King had run a new personal best ET of 5.878 secs @ 225.07 mph, quick enough to make King the fifth fastest dragbike racer of all time.

The celebrations started with the arrival of an emotional Mike and Sandy Marsh at the top end, and continued for hours after around the team pit area (including a surprise bath in a tub of freezing cold water courtesy of semifinal opponents Team McBride…)