In his first year on a new Victory Factory Racing Gunner, two-time Pro Stock Motorcycle world champion Matt Smith already considers his 2015 NHRA Mello Yello Drag Racing Series season a success by securing a top 10 spot and a berth in the Countdown to the Championship.

But a strong performance at this weekend’s eighth annual NHRA Carolina Nationals at state-of-the-art zMAX Dragway, which kicks off the six-race NHRA playoffs, and Smith could have an entirely new set of goals for the final five races following it.

Smith enters the Countdown to the Championship in the sixth position, meaning he already considers the season a success on a new bike, but he also knows a win could put him in a good position to make his 2015 season even better.

“If you win the first race you put yourself in a good spot to win a championship,” Smith said. “It doesn’t matter where you’re at in the points, if you win that first race it gives you momentum and you can just accelerate from there. Hopefully we can do better than we did the first time in Charlotte this year (at the NHRA Four-Wide Nationals) and get at least a semifinal or final, and maybe give ourselves a chance to win.”

Tony Schumacher (Top Fuel); Matt Hagan (Funny Car) Jonathan Gray (Pro Stock) and Eddie Krawiec (Pro Stock Motorcycle) were last year’s winners of the playoff opener. ESPN2 will provide national television coverage of the NHRA Carolina Nationals. The event has kicked off the Countdown to the Championship since 2007, giving drivers a chance to quickly jump into the championship mix at the first of six playoff races.

Smith, who lost in the second round of the NHRA Four-Wide Nationals in Charlotte in March, sits just 70 points behind points leader Eddie Krawiec heading into the Countdown to the Championship. That opens up the possibility to compete for a third world championship, but Smith is already extremely pleased with the direction his 2015 season has gone.

He hasn’t won a race, but Smith has advanced to one final round and stayed competitive in the first season of breaking in a new bike.

“We’ve made a lot of progress with this Victory Gunner the last five races,” said Smith, who has qualified sixth or better at three of the past five events. “I set two goals for this year: The first was to make the top 10 and we accomplished that and the second was to try to win a race for Victory. That’s our main goal during the Countdown. We have a brand new motor we built for the Countdown, so it will be interesting to see how it goes. It might help us a little bit and if it doesn’t we know we have a good motor already.”

Smith certainly plans to give it everything he has during the Countdown with hopes of winning a championship, and debuting a new motor in Charlotte is evidence of that. But he also considers any success that comes over the next six races as icing on the cake to a great debut season with Victory. 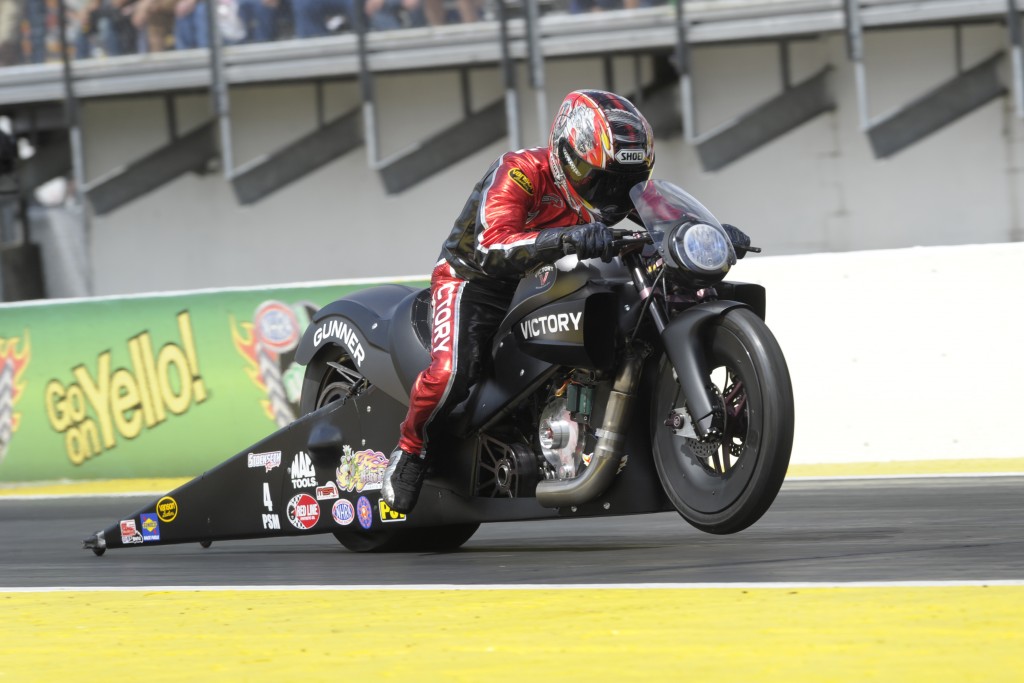 That said, the competitor in Smith is ready to tangle with the best in the loaded Pro Stock Motorcycle class over the next six races starting in Charlotte.

“I have to focus on what I need to do, which is win rounds,” Smith said. “If we get to 2-3 races left and it looks like we can run for a title, we’ll do that. If not we’re still going to try to get wins for Victory this year. But we have a good shot at it and a good shot at moving up. The Countdown is tough, but now that we’ve made it we want to run (well) and try to win a race. I just have to make the best runs I can. That new motor might really respond and show a lot on the track. We’ll see if we can make some rounds and maybe give us a chance.”

Smith, who has 17 career wins, will start the Countdown at zMAX Dragway less than 60 miles from home, making it a familiar track for the King, N.C. native. He’s also had success in Charlotte, winning in 2010. To grab another victory, he’ll have to ward off defending Pro Stock Motorcycle world champ Andrew Hines, a two-time winner of this event, defending winner and points leader Krawiec, Hector Arana Jr., who starts the Countdown in second, Jim Underdahl, Hector Arana, Karen Stoffer, alligator farmer Jerry Savoie, who won at Indy for the first time in his career and moved all the way to fourth, Chip Ellis, who jumped into eighth after a runner-up finish in Indy and Scotty Pollacheck.

“I love racing in Charlotte and it’s an awesome track,” Smith said. “I’ve tested a lot there and I really like the track. I know it well and I knew we can run well there. Hopefully we can do it again.”