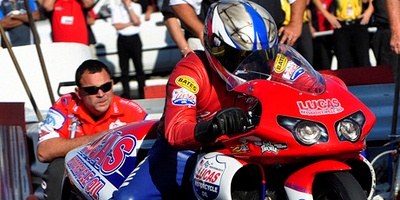 No one has been better in the Pro Stock Motorcycle class during the NHRA’s Countdown to the Championship playoffs than Lucas Oil rider Hector Arana Jr.

Now the question is, can he turn that momentum into a championship and the rookie-of-the-year award?

“It would mean everything in the world,” Arana Jr. said of winning both awards. “It would be a dream come true. Coming into the season, riding a Pro Stock Bike was everything I wanted to do. Now to be in a position to get rookie of the year and maybe the championship too… it’s awesome. Right now we’re on track, so we need to stay focused.”

Arana Jr. is second in points, 35 out of first place. He’s reached the final round of eliminations in four of the last five races, including the last two, as the Countdown started three races ago. Plus, Arana Jr. scored his second victory of the season in the most recent race at Reading.

“The Countdown has worked out great for us so far,” Arana Jr. said. “It’s obviously the perfect time to get on a hot streak. We’ve seen in the past where drivers have done real well in the first few races and built up a big advantage. It makes it almost impossible for the others to catch up. We’ve managed to jump up a bunch of spots and get the leader right in front of us since the Countdown started.

“It’s really worked out to my favor, being a rookie. We started the season off with a brand-new bike and rider. I didn’t have any experience and kind of had to learn along the way, but we’ve been on a nice upward climb ever since. The regular season was long enough for me to catch up and make the top 10, and now we’re racing the best we have all year.

“We’ve got a consistent bike. We’ve got a lot of horsepower. She goes right down the track every time.”

That’s all Arana Jr. and his Lucas Oil team will focus on during qualifying and the race when they get to Phoenix.

“The points are in the back of our head, but we’re not looking at the points, we’re not stressing that,” Arana Jr. said. “If we worry about the points it’s going to bite us in the butt. We’re just focusing on qualifying good, winning rounds, going down the track and making good passes every time.”

They’ll have to make those passes on a new track this weekend, as Firebird was refurbished before being added to the Countdown roster for 2011, giving all competitors their first crack at a new racing surface. But going in blind is business as usual for Arana Jr., who is racing on every NRHA track for the first time this season.

“We don’t have a tune-up or any data to go look up from previous years,” Arana Jr. said. “It’s going to be an even playing field for everybody. Hopefully we can be the first ones to nail a tune-up for the track.”